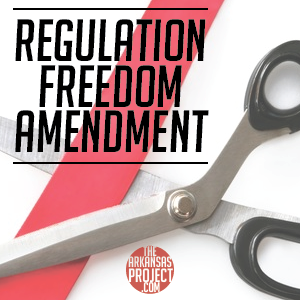 Earlier this week, we had guest commentary from Michael Farris and Nick Dranias on Article V reform. We hear lots and lots of talk about how we need to amend the federal Constitution. I have lots of friends tell me how important it is to have a Balanced Budget Amendment and a congressional term limits amendment. I agree.
But I think it’s probably just as important – and maybe more so – to limit the immense power of federal regulators by constitutional amendment. One reason for that is that at least we can measure all the damage we do to our future by means of deficit spending. It’s a lot harder to tell how much we’re harming ourselves through unjustified regulation – because there’s no way to measure the damage.
There’s a proposal gathering steam that would curb irresponsible regulation and restore state-federal balance to the American system. It’s called the Regulation Freedom Amendment.
Indiana state senator Travis Holdman and friend of AAI Roman Buhler recently coauthored an article on the Regulation Freedom Amendment. Here’s a taste:

It is no secret that ill-advised federal regulation is a major threat to American economic growth. Far too often, federal regulators in Washington impose well-intentioned but poorly thought out regulations that reduce middle-class manufacturing job opportunities for the hard-working Americans who need them most.
But an exciting new effort led by state legislators around the nation could curb the authority of federal regulators by forcing Congress to take action to require that major new federal regulations be approved by Congress before such regulations take effect.
With a legal strategy used by states several times in American history, two-thirds of the states could force Congress by 2015 to propose a “Regulation Freedom” amendment to the U.S. Constitution!