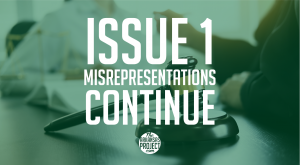 We’ve talked about tort reform and Issue 1 a lot on TAP. It would be nice to focus more on other issues, but for some reason the trial lawyer lobby continues to focus on tort reform. Why, it’s almost as if those who benefit from the current system are especially interested in preserving the status quo! We’ll continue to do our duty here on TAP to continue to resist the trial lawyers’ attacks on limited government, free markets, and Issue 1.

The latest attack on Issue 1 comes from Suzanne Clark, president of the Arkansas Bar Association. She wrote an op-ed for Arkansas Business that rehashes some of the usual talking points about tort reform.

The op-ed starts off with the criticism that Issue 1 will violate the separation of powers between the judiciary and legislative branch: “The judicial branch, charged with defending the Constitution and upholding the rule of law, should not be subservient to the Legislature.” This is an unimpressive way to begin, because anyone who knows anything about the state Constitution knows that it’s everyone’s job to defend it, and certainly everyone in state government — notably, public officials have to swear an oath to protect it and defend it before they get sworn in. Furthermore, Clark can rest easy, because there is no reason to take her theory about subservience seriously. If the voters approve Issue 1, the judicial branch will not be subservient to the legislature: having some checks-and-balances between the three branches of government does not make one subservient to the others.

In fact, the current system that Clark defends makes Arkansas much closer to the legislature being subservient to the judicial branch. When legislators pass laws that affect broad public policy, Arkansas has seen many instances of the courts striking down such laws due to an overly broad reading of the judiciary’s rule-making authority. Issue 1 is necessary to return power to make public policy to the people’s elected officials.

Clark also once again brings up the canard that this may be a way to change the Arkansas civil legal system to a loser-pays system. I don’t understand this tactic for a few reasons. For one, I have not heard anyone in support of Issue 1 saying this. You would think that someone would let the secret slip if this were really what is behind the pro-Issue 1 campaign. Secondly, the idea of the loser paying for court costs (rather than someone who is unjustly sued being responsible for his or her own court costs) is pretty popular. The trial lawyers raising the specter of “loser pays” are out of touch with ordinary Arkansans if they think that this is a good campaign tactic.

The major reason I am perplexed by the repeated use of “loser pays” to attack Issue 1 is what I have discussed previously – a major change to the state’s civil legal structure is something that should be done by legislators elected by the people, not judges accountable to no one. Continually raising this issue in the campaign against Issue 1 illustrates just how much essentially unaccountable power rests with the judiciary to make policy decisions.

Clearly, the lawyer lobby thinks that the lines of attack used by Clark are their strongest arguments. They will continue using them until Election Day. And, until this matter is settled, TAP will continue rebutting these misleading attacks on Issue 1. The people of Arkansas deserve to know the truth about this important ballot measure.

Update: After the submittal of this blog for publishing, Ms. Clark responded to some questions I had submitted to her regarding her op-ed. I will be writing a follow-up post to be published on Monday with those questions, her answers, and some thoughts on those answers.