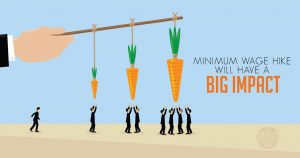 On Election Day, voters will have a chance to decide if Arkansas workers will be prohibited from accepting a job that pays less than $11 per hour.

That is the essence of the ballot measure to increase the state’s minimum wage. It would outlaw anyone from working for less than $11 an hour, regardless of the worker’s preference or the value of their labor. If that happens, it would have a big impact on the state.

Jeremy Horpedahl, an assistant professor of economics at the University of Central Arkansas who also works for the Arkansas Center for Research in Economics, has written an op-ed that every voter should read before voting on the minimum wage. In it, he points out that this mandatory wage hike will have an outsize effect in Arkansas, a state with a relatively low median wage rate:

But is it really that easy? Anyone who has taken a basic economics course knows that as you raise the price of something (labor), the demanders (employers) want less of it. A legal minimum wage increases unemployment. Combined with the increases from 2015 to 2017 in Arkansas, the cost of some workers will increase by 50 percent in just 6 years.

It is difficult to see how government mandates of higher wages for such a large number of Arkansas workers will not have some sort of effect in the state. Proponents of the minimum wage do not seem to have considered where the money for these higher wages will come from. They also do not seem to realize that some employers cannot afford to pay a higher wage for some workers’ labor, which carries with it a profound consequence: these workers will lose their jobs.

A startlingly high wage increase of this sort will have important effects that will ripple throughout the state’s economy. Some workers will certainly receive a pay increase. That much will be a visible effect if voters approve this measure. But other effects, such as higher prices or people losing their jobs, will be largely invisible.

One of the most important things that economics can do is show us not only the seen effects of a policy, but the unseen effects. Horpedahl does an excellent job of pointing out some of the unseen (and malign) effects that such a high mandatory wage rate may produce.