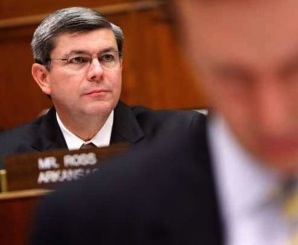 This morning, I posted a six-second clip of former Congressman Mike Ross saying if he had not voted for Obamacare in committee, it wouldn’t have become law. I emphasized in my initial post that the six-second clip provided no context for the remarks — and added that if someone could supply a longer video, I would be happy to post it. Shortly thereafter, it was given to me, and I was happy to post it. While the new video doesn’t provide complete context (we don’t hear the question Ross is responding to) and it’s also edited, it gives us a better look into what Ross was saying — and its even more damning than we initially thought.
What Mike Ross said in the first video is correct: if he hadn’t voted to get “health care reform” out of committee, it never would have become law. But what we learn from the new video is that Mike Ross wants to have it both ways: he wants to get credit for voting against the bill on the floor — which he describes as “every chance I got” — but also get credit for the fact that he was instrumental in crafting what ultimately became the Affordable Care Act.
Here are some excerpts:

Ross goes on to explain in the video that he helped design the bill and attempted to improve it. He explains that he helped make it more palatable to rural Arkansas by removing a requirement that the public option be based on Medicare rates. He explains that he redesigned Obamacare so that it wouldn’t take us into a single-payer system. In other words, he helped craft the version of Obamacare that we have today. Or to put it another way: he helped Obamacare become law, not only by voting for it in committee, but by designing it. (I only wish he had used his incredible influence to stop the individual mandate.)
What Ross is saying is kind of like your friend telling you, “Hey, these guys from across town, they wanted to egg your house, but I told them not to. So I helped them carry a 55-gallon drum of dog feces onto your porch, which they then set on fire. I was against that too, but at least they didn’t egg your house: I nipped that bad idea right in the bud. You’re lucky I’m looking out for you.” Don’t you see? We really should all be thankful for the hard work that Mike Ross put in on Obamacare; we should appreciate the way he made it somewhat less awful, because that way it was able to pass Congress. Oh, and by the way, he’s against Obamacare and voted against it on the floor of the House.
According to Ross, he believes many provisions of Obamacare — or at least he did when this footage was taken. He defends the provisions of the law that he thinks are acceptable, such as extending the period of time that kids are able to stay on their parents’ policies. But at the same time, he doesn’t want to be attached to the finished product, and he tells the crowd he voted against it “every time he could” (which isn’t true, by the way). This is similar to what Orwell would call “doublethink.”
Democrat spin doctors want to continue to try and say we “selectively edited” the original Ross video in an attempt to “deliberately mislead” and give Arkansans the false impression that Ross supported Obamacare. Unfortunately, the facts are not on their side. We didn’t edit the video at all — it was all that was sent to us and that’s all a sideshow. The bottom line is that, without Mike Ross, we wouldn’t have the version of Obamacare we have today. If you don’t believe me, you should listen to Mike Ross in his own words.