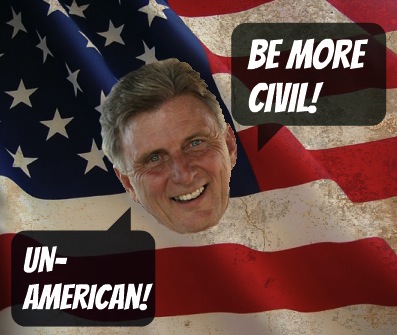 Remember earlier this month when Governor Mike Beebe went to a green energy conference in Atlanta and called a large portion of Americans “un-American” for opposing wind subsidies?  That was kind of rude.  Now, believe it or not, he’s lecturing Arkansans about being more ‘civil.’

According to the AP, “Beebe told the group that partisanship has attacked the country from within and urged them to elect people who believe in working together.”

‘Attacked the country from within.’  I agree.  Reminds me of that time my governor called me un-American.

Also according to the AP, “Beebe told the Arkansas Municipal League on Thursday that Congress has lost the ability to compromise and he doesn’t want to see that happen in the Legislature or in communities across the state.”

Translation:  “Oh, crap.  We are about to lose the legislature for the first time since Reconstruction.  We should probably start talking about compromise a lot.”

Conservatives in Arkansas should brace themselves for more of this type of inflammatory rhetoric.  In this election year, with their long-held political power on life support, liberals are desperate for a hook.  They’re looking for anything that will stick.

Conservative leaders should let the children play and continue to lead on the issues (oops, is that uncivil?).  Governor Beebe and his party have no credibility–not on ethics reform, not on civility, and certainly not on their governing record.  But what do I know, I’m un-American.