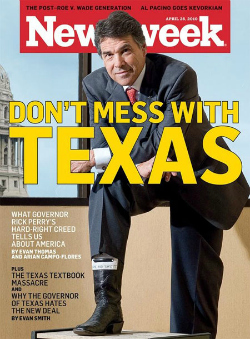 Democratic blogger Michael Cook at Talk Business/Talk Politics has pertinent questions for Arkansas Republican legislators who have endorsed Texas Gov. Rick Perry to be the next GOP candidate for president. These questions are pertinent, dammit, he insists!

Cook apparently read Perry’s book, for some reason. (No, I have not read it, because I am sure it is an absolute piece of sh*t. Rule: Books by living political figures are always total pieces of sh*t, and they get even sh*ttier when written as a prelude to a run for higher office.)

Having digested the volume, Cook judges Perry’s views on Social Security and other issues to be “out of the mainstream,” and pointedly asks if Arkansas GOP legislators would agree with the Texas governor on these hot-button issues. Take that, Arkansans for Rick Perry! Because it is a well-known fact that state legislators will play a vital role in deciding the future of Social Security, you see.

Say, leaders like President Barack Obama, who continues to be abidingly and abysmally unpopular in Arkansas, and will no doubt remain so through 2012. (And who, it should be noted, hasn’t just written books about his proposals—but has had the opportunity to enact them on the national level, to largely disastrous result.) Is that a discussion that Arkansas Democrats are aching to take up? Not from what we’ve seen.

The astonishing part is that Cook seems to believe this clever tactic would box these Arkansas Republicans in, put them on the defensive. I think the phrase you’re looking for is “hoist with his own petard.”

2 thoughts on “Michael Cook Has Arkansas Republicans On the Ropes! Or Maybe Not!”

Leave a Reply to Bill from Sheridan Cancel reply