There’s been a lot of talk about the wonders of Medicaid expansion from the Arkansas media and from Republican and Democratic policymakers, but there’s been very little attention paid to the real cost. I have previously written that the expansion could cost Arkansans up to an additional $148 million per year. Now, the Heritage Foundation has released a study that shows a more complete picture: 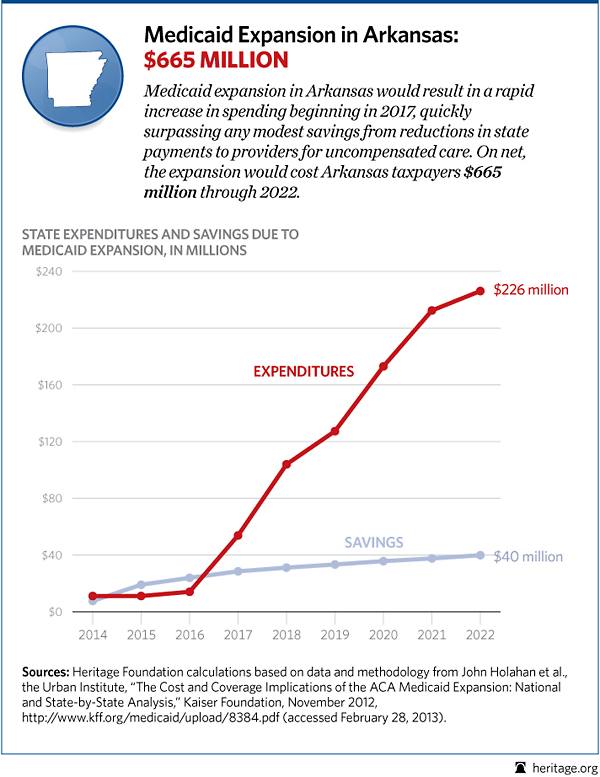 As you can see, expansion will cost Arkansas taxpayers a net $665 million through 2022 and will quickly negate any minimal savings the state may see due to a reduction in uncompensated care. Drew Gonshorowski from Heritage, who helped compile these figures, tells me that these figures only partially account for the “woodwork effect” (the idea that existing patients who are already eligible for Medicaid will begin to flood the rolls). When that happens, the cost will necessarily increase, but it is hard to know exactly how much. Of course, this assumes that the federal government keeps its end of the deal and pays for the majority of the costs. But they’ve already given some indication that they may break the bargain.

This observation doesn’t come from the vast right-wing conspiracy; the liberal Center on Budget and Policy Priorities reported critically about this back in 2011. The idea is also floated in the White House’s own Fiscal Year 2013 “Cuts, Consolidations, and Savings” report. Heritage estimates that if the feds implement the changes in reimbursement rates — which will “save” the federal government money by shifting more of the costs to the states — it will cost states up to an additional $3.4 billion per year. These revised reimbursements are referred to by policy experts as “blended rates.”

If the federal government adopts the blended rates model, Arkansans could be on the hook for closer to $1 billion over the next 8 years. This is no small matter.

In January, I interviewed Rep. Reginald Murdock about Medicaid expansion and specifically asked him if he thought the feds might break their word. More precisely, I asked “Are you worried that the federal government may break its promise and not continue funding the 90% of the expansion that they have promised?” His response: “No.”

Unfortunately, I think many legislators would give the same response as Rep. Murdock — not necessarily because they’re ignorant, but because they’re short-sighted. (Rep. Murdock, of course, can afford to be short-sighted; assuming he wins re-election next year and serves out his third term, he will be then be banned from service in the House for the rest of his life.) Rather than make hard decisions now, some legislators apparently prefer to kick the can further and further down the proverbial road. Accepting “free” money would be a lot easier than asking tough questions and demanding answers from the feds about the likely facts of reimbursement rates.

It’s remarkable how little attention this prospect of a federal bait-and-switch has received from local media and legislators. At the same time, many legislators who identify themselves as conservatives have apparently embraced Medicaid expansion in the last few weeks. Legislators should closely examine the significant possibility that the federal government will break its promise and change the reimbursement rates. When they do, how will Arkansas react? Will we start kicking people off the rolls? Will we be coerced into raising taxes?

Legislators need to remember: there is nothing free, regardless of what Governor Beebe tells them. Medicaid expansion will carry a hefty price tag. We need to ask many more questions before we take our state further down an unsustainable fiscal path. Accepting any kind of expansion suggests that the pain will be much worse down the road.