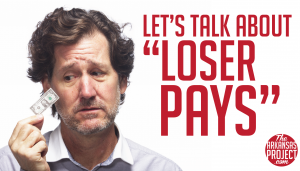 When are judicial actions really public policy decisions? Who should set the rules in these areas – judges or legislators?
These are some of the questions at the heart of SJR 8, the tort reform measure on the ballot this November as Issue 1. As expected, trial attorneys are mobilizing in heavy opposition to this proposal. One of the more interesting attacks on Issue 1 comes from Annabelle Imber Tuck, a retired Arkansas Supreme Court Justice. She sent an e-mail to the legal community asking for money and volunteers to defeat Issue 1. Her main topic of concern is that Issue 1 would allow legislators to have some say in judicial rulemaking. In doing this, she picked an interesting scenario to highlight as a potential horror story. Here is the horrible rule change that she says could occur upon passage of Issue 1:

One example of a rule change being promoted by Issue 1 special interest groups is abolition of the American Rule (which provides that each party pays his or her own attorney’s fees unless a statute provides otherwise) and adoption of a rule requiring the loser to pay the prevailing party’s attorney’s fees.

As Tuck points out, currently Arkansas operates under the American rule, where litigants generally pay their own legal costs. But the alternative is the English Rule, which is a “loser pays” compensation system, where the losing party in a suit pays the winner’s legal costs. For many people, “loser pays” sounds like a commonsense idea. Maybe that is why Tuck doesn’t actually use this term.

Right now, if someone sues you and you win, you still suffer because you may have thousands of dollars in legal fees. Under “loser pays,” this would not happen.

The American rule makes the civil justice system as a whole unnecessarily costly by encouraging the filing of dubious lawsuits, which defendants must either settle quickly or defend against at significant cost. Such low-merit legal cases clog the American legal system and raise the cost of goods and services to consumers by forcing businesses that are sued to cover their legal expenses by raising prices.

There are certainly arguments against “loser pays.” These are policy arguments, however, not matters that involve the arcane rules of the judiciary. Much of the world uses the “loser pays” system, and it is legitimate area for people and politicians to debate. There is no reason that this issue should be left solely to the self-interested decision-making of lawyers and the judiciary.

I have not heard any serious talk that if Issue 1 passes then there will be a concerted push to enact “loser pays” in Arkansas. Likely this is being thrown out by Tuck as a way to scare attorneys and get them motivated to work against Issue 1. But let’s say that Issue 1 passes and there is this push in Arkansas. Why is that a bad thing? Does Tuck think that legislators – those elected by the people of Arkansas – should not be able to debate this issue? Does she think that decisions about moving to a “loser pays” system should be out-of-bounds for the public policy process?
If current rules prohibit legislators from considering a “loser pays” system, this is a huge argument in favor of passing Issue 1. That sort of major issue is a public policy discussion that should be decided by representatives of the people, not judges. It is unclear why Tuck thinks this should be up to the judiciary to determine this issue, not the legislature (by a super-majority vote). For anyone but an attorney, it seems clear that such a significant question about the legal system should be determined by the people acting through their elected officials.

I appreciate Tuck stating the case in favor of Issue 1 so starkly, though I know that was not her intention. She used the perfect example to illustrate how absurd the current judicial monopoly on rulemaking is.

My next blog post will discuss some further issues raised by her e-mail.