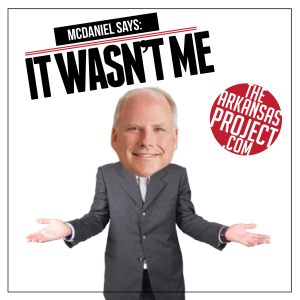 We’ve written before about the ill-conceived waste of money that is the Bowen Law School 6th floor gym. Who decided to spend the money that Bowen received on a law school gym? According to e-mails from the Bowen bureaucracy, the workout facility is the brainchild of both the law school and Attorney General Dustin McDaniel.  The “small gym,” was devised, according to Bowen administrators, only after the AG stated he wanted a “building project,” and this workout facility started to become reality after Dean “Mike [Schwartz] ha[d] spoken to Dustin and Dustin liked the idea.”

According to McDaniel’s office, however, he never specified that he wanted to spend the money on a gym. He said that he gave the public’s money to the law school, and the Bowen administration decided how to use it.
As John Kennedy once said: victory has a hundred fathers, but failure is an orphan. (We’ve already written about the likely consequences of this gym’s inadequate support infrastructure – namely, hour-long waits for those who want to take a shower after a workout, and sweatiness and smelliness for those who don’t.) Bowen administrators were, at one point, so pleased with themselves that they were considering inviting the attorney general to something like a grand opening ceremony.

I can only imagine how the attorney might respond to such an invitation, once he and his staff began to realize the dimensions of this fiasco. Perhaps something along the lines of “Thanks anyway, but I have a stateroom reserved on the Titanic that evening.”
It’s too bad that Bowen administrators didn’t spend a little less time on manufacturing an effusive plaque thanking Dustin McDaniel for his generosity with public money – and a little more time thinking about how they’d get the highest and best use out of $100,000. And Dustin McDaniel would be well advised to pay more attention to what is done with the slush fund of government cash that he continues to throw around the state without the benefit of public oversight.