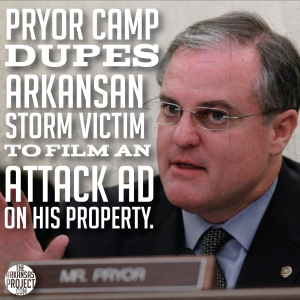 It seems like just yesterday Mark Pryor staffers and supporters were all excited about a new campaign video regarding Tom Cotton and disaster relief.
To me, it seemed a tad cynical to use storm victims as props for a political ad, but I figured maybe I was just being overly sensitive.
However, it never occurred to me that at least one of the owners of the damaged property featured in the video was not okay with his property being featured in the ad.
But today we found out that’s exactly what happened.
Doug Boydston, owner of the video-featured property where Mayflower RV was destroyed, said in a letter yesterday to Jeff Weaver, Pryor for Senate campaign manager:

You obtained this footage under false pretenses, and I demand that you remove these videos and immediately stop all use of the raw footage.  Neither you nor any outside group has my permission to use my property for your own gain.”
When you called me to request permission to hold an event at Mayflower RV, you told me that Senator Pryor and Mayor Holland would be present at the event to help bring attention to the tornado devastation and help me ‘clean up.’  Believing this, my wife and I invited a large group of friends to meet Senator Pryor and take part in the conversation about recovery.”
Shortly after your campaign’s arrival, we realized the truth, and we asked you to immediately pack your equipment and leave.  Had we realized your actual intent was to film a political ad, we would have rejected your offer and certainly would never have invited friends to attend such a farcical event.”
Let me be clear: you did not have permission to film a political ad on my land, and if you or any other group uses this footage, I will have to consider all available legal action for the unauthorized use. Your actions were wrong and I respectfully ask you to remedy the matter instead of further abusing my trust.

After the letter was made public yesterday, Weaver gave the standard “it certainly wasn’t our intent to mislead anyone” political, non- apology to KATV, but he did say the Pryor campaign would edit out the parts of the video shot on Boydston’s property.
So there you have it: the Pryor campaign just took a big hit on disaster relief credibility with this latest information.
Duping a voter into involvement with a political ad isn’t a great way to show you’re above “blind ambition,” but it does show that all that talk about putting Arkansas first is just a nice-sounding slogan.
Boydston also talked about this incident with the Pryor campaign yesterday in a radio interview with Paul Harrell.