After 11 years in the U.S. Senate, embattled Senator Mark Pryor finally joined the rest of civilization and set up a Facebook page last year. I’d say this is a smart move, considering his re-election hopes get dimmer by the day (Rep. Tom Cotton outpaced him in fundraising last quarter, and political sage Professor Larry Sabato just moved the race from “toss up” to “leans Republican.”)

Pryor mostly uses his Facebook page to post photos: Pryor in camo, Pryor with Bill Clinton, or a cute shot of a plaque on Pryor’s desk that reminds him he’s from Arkansas. There are also plenty of posts about how Tom Cotton is a “young man in a hurry,” rushing off to the U.S. Senate to take part in subversive activities! (e.g., to limit the size, scope, and cost of government)

One of Pryor’s posts in particular keeps catching my eye; I guess it’s because people keep commenting, forcing it back into my newsfeed: 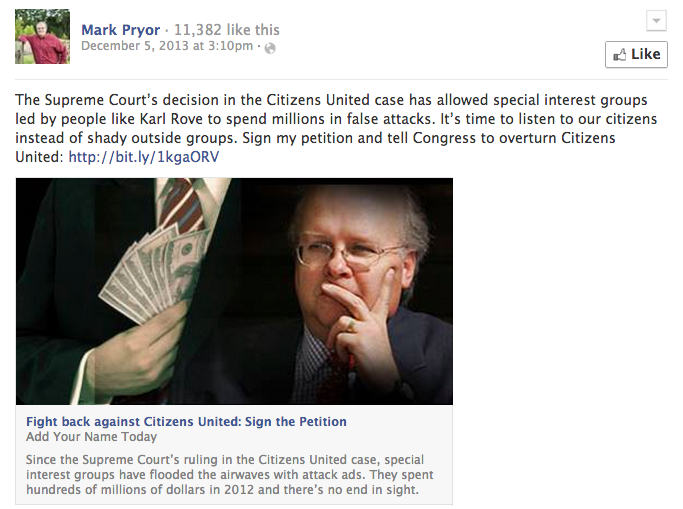 I finally took the bait today and clicked on the post. What I found in the comment section may not bode well for Pryor — but I thought it was hilarious.

Here’s a taste of the comments — and there are hundreds more:

I’m not prepared to make any predictions regarding Pryor’s electoral fate based on some Facebook comments (did I mention there’s, like, hundreds of them?) But a few things are pretty clear: Arkansans seem to be awfully knowledgeable about Senator Pryor’s record and, no matter how much he tries, he cannot escape it.