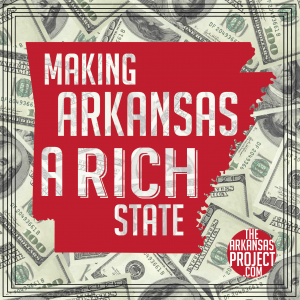 What can Arkansas lawmakers do to grow the state’s economy in the years to come?
That’s the question a new study, Rich States, Poor States, seeks to answer. Compiled by Arthur B. Laffer, Stephen Moore, and Jonathan Williams, this study identifies pro-growth tax and regulatory policies that states can implement. It also discusses what states are doing to attract new businesses and create jobs for their workers.
In state rankings released in conjunction with this study, Arkansas came in at 26th in the economic outlook rankings. That’s a big drop from 2012, when it ranked 11th.
The economic outlook rankings are relative. A state gets ranked based on what other states are doing. That’s because in today’s world, businesses and workers are more mobile than ever. They can choose where to locate in ways that weren’t available decades ago. This mobility is even more pronounced regionally. A company that wants to serve Arkansas consumers could, in many instances, easily do so from Oklahoma or Missouri.
That fact should trouble Arkansas policymakers. As this report discusses, nearby states like Missouri and Kansas have enacted tax cuts that improve their long-term economic outlook. Other states, such as Texas, Mississippi, and Tennessee, already have better opportunities for growth than Arkansas. If policymakers want the state to attract new businesses and retain current ones, they need to embrace pro-growth policies.
What can Arkansas do to improve its prospect for economic growth?

While Arkansas has some things to improve, it is starting from a solid base. Here are a few areas where the state ranks highly:

Two simple steps that state policymakers could do to move Arkansas into the “Rich States” category is to reduce the corporate tax rate and the top marginal personal income tax rate. Other states in the region are doing this. Even some northeastern states, such as New York, are embracing pro-growth tax policy after decades of trying to tax their way to prosperity.
It’s time for Arkansas to reverse its recent anti-growth policies and embrace a path to prosperity.