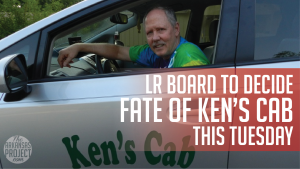 Ken Leininger is about to face his last hurdle in a two-year battle to operate a taxi company in Little Rock.

Leininger will go before the city’s Board of Directors Tuesday in an attempt to secure seven taxi permits.

Leininger, founder of Ken’s Cab and represented by the Institute for Justice (IJ), sued the city of Little Rock last March over an ordinance that prohibited any new cab companies from competing with the city’s chosen company, Greater Little Rock Taxi Service, LLC (“Yellow Cab”). This ordinance allows new taxi permits to be issued only if “public convenience and necessity” leave no other choice, and if doing so will not harm the existing permit holder. Under the ordinance, the city created a monopoly that barred entrepreneurs like Leininger from competing with Yellow Cab. According to the state Constitution, monopolies “are contrary to the genius of a republic, and shall not be allowed.” Pulaski County Circuit Court Judge David Laser ruled in December that the ordinance violated the anti-monopolistic prohibition contained in Article 2, Section 19 of Arkansas’s Constitution.

Attorneys for the city of Little Rock have declined to appeal Laser’s ruling.

Justin Pearson, an IJ attorney representing Leininger, told The Arkansas Project Friday afternoon that the Tuesday meeting was “not just a formality” — even with Laser’s ruling and the city attorney’s recommendation that Leininger receive the permits.

It’s been a long fight. Ken should have been allowed to open his business two years ago. All he wants to do is compete and create jobs. The Judge ruled that some of the criteria was unconstitutional and Fleet Services has said he meets all the other criteria so hopefully the Board of Directors will do the right thing and give this hard working small businessman his permits.

The meeting is scheduled to begin at 6 p.m. Tuesday at City Hall. Hopefully, Leininger is successful and the Board of Directors will put an end to this whole sad ordeal Tuesday night.