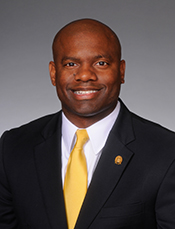 The ArkTimes reported this morning that the Arkansas Legislative Black Caucus is holding a “Vigil for Justice” tonight at the capitol in response to the George Zimmerman verdict. Representative Fred Love, chairman of the ALBC, issued this statement on the matter:

The Arkansas Legislative Black Caucus joins the National Black Caucus of State Legislators in our disappointment of the not guilty verdict as well as their opposition of Stand Your Ground/Shoot First laws in the U.S. While we respect the jury has spoken, we must nevertheless take this tragedy as evidence that racial profiling still exists and there is an urgency for the community as a whole to address this issue.

I underlined the part of this statement I was most curious about. Did Fred Love really think that the jurors were without any reasonable doubt about Zimmerman’s guilt? When I called Rep. Love for further comment, however, he explained to me that he’s actually not disappointed in the verdict in the Zimmerman case:

No, it’s not our call to say that the jury was right, wrong or indifferent. It’s just the fact that you just feel a sense of disappointment. But no, we are not, we were, we are not in a position to say the jury was wrong in the decision that they made because sometimes we don’t have all the facts. So no, the legislative black caucus is firm in saying that, although we’re disappointed — I mean, no, no, we’re not holding judgment on the jury saying that they’re right or wrong.

Instead, Love told me he’s disappointed that racial profiling happened, something he called “indisputable:”

Well, the disappointment…is basically instilled in the fact that here is a young man that was, that did nothing wrong, he was profiled, and he is dead as a result. So I mean that’s indisputable. I may not have all the facts of the case, but what is indisputable is that he was racially profiled … I’m not here to dispute the fact that the jury was right or wrong in the decision that they made. But the fact of the matter — it’s indisputable that it was racial profiling. The young man was pretty much…targeted. It’s without a doubt, it is racial profiling. Now, we can have a disagreement on that. I’m here to listen to anybody that says, ‘You know, hey, we can dispute the fact that it was racial profiling.’ I wouldn’t change my stance…But it’s not the fact that we’re here to say ‘Oh, the jury was wrong and they should reconsider’ because I don’t know all the facts of the case.

I’m not sure why Rep. Love waited until today to issue this statement — Trayvon Martin was killed over a year ago. It seems he’s had plenty of time to issue a statement of disappointment about his death and his profiling. Unless of course you believe his disappointment was actually created by the jury verdict, as he originally said.

If you’re in Little Rock tonight, the vigil is being held at 8:30 at the Capitol. I wonder if Rep. Love will express disappointment in the Zimmerman verdict.

3 thoughts on “Love Changes Everything”