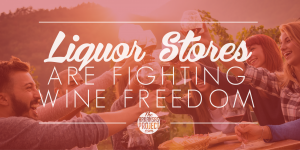 Should you be able to buy a wider selection of wine at the grocery store? Legislators say you should, which is why they passed (and the governor signed) a bill earlier this year making it legal for grocery stores in wet counties to do so. But the stores that had the exclusive right to sell this wine don’t want competition. They couldn’t win in the legislature, so they turned to the courts in an attempt to delay (if not invalidate) the freedom to purchase wine easier (and cheaper). In a win for consumers, a federal judge didn’t buy the liquor stores’ arguments.

Arkansas law permits grocery stores to sell “small farm” wines that come from wineries producing fewer than 250,000 gallons a year. After a contentious fight, legislators passed SB 284; this measure allowed grocery stores to sell any type of wine as long as they are located in wet counties and receive the proper state permits. This law was supposed to go into effect in October.

This did not sit very well with liquor store owners whom the state had previously given exclusive power to sell large-batch wine. They recognized that this bill meant more competition for them. Stores like Walmart could sell wine, leading to lower consumer prices. As Adam Smith once pointed out, “People of the same trade seldom meet together, even for merriment and diversion, but the conversation ends in a conspiracy against the public, or in some contrivance to raise prices.” These liquor store owners banded together to work against the public interest and keep prices high by going to court to stop this pro-consumer law.

Those testifying in favor of stopping this law from going into effect said that the law will hurt them financially.

John Crow, a part owner of a liquor store in Sherwood, testified that if the new law goes into effect, he will lose money. The Arkansas Democrat Gazette reports that under further questioning, Crow revealed that this was the only harm that would come from wider sales of wine:

If the permits are issued, “Can you point to any other harm you would suffer, other than increased competition?” asked Assistant Attorney General Jennifer Merritt.

“No,” Crow replied, echoing the answers of other liquor-store owners who testified about the financial impact they expect to suffer if grocery retailers are allowed to sell the same type of wines — from average $10 bottles to more expensive high-end varieties — as the liquor stores now sell exclusively.

Is it really a proper function of state government to protect the profits of a certain class of business owners? A recent legal case in South Carolina dealing with alcohol sales found that state’s high court issuing a definitive “no” to that question. Here’s how C. Jarrett Dieterle of the R Street Institute describes that court’s decision:

…the court’s majority held the state’s grant of power was not unlimited. While the government could use its police powers to “regulate any trade, occupation or business,” it must have a proper reason to do so, such as to protect “public health, morals, safety or comfort.” Therefore, the state law limiting liquor retail outlets could only be permissible if it was enacted to advance those core police power objectives.

It was here that the law faltered. Rather than protecting health, safety, or morals, the court found the law’s only justification to be raw economic protectionism. It advantaged smaller, incumbent liquor retail stores over larger chain stores that sought to establish a presence in the state. For this reason, the court held: “Without any other supportable police power justification present, economic protectionism for a certain class of retailers is not a constitutionally sound basis for regulating liquor.”

There are obviously differences between the South Carolina case and the Arkansas case, but the broader point remains – the liquor stores seeking to stop the law widening wine sales are doing so solely to protect their profits. They are not attacking this law as a threat to the public or a danger to Arkansans’ health. They merely want to ensure that they do not face wider competition.

In a decision handed down on Tuesday, a federal judge ruled against the liquor stores’ request to grant an injunction against the law. The judge also concluded that their case was unlikely to win on its merits. Legislators and the governor did the right thing by allowing more competition in wine sales. It is nice to see that the court system did not indulge the anti-competitive suit brought by liquor stores.