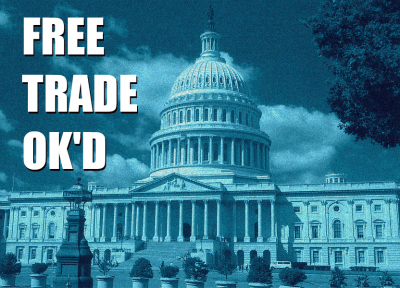 Hey, look at Congress! While you weren’t paying attention they took a break from being more or less absurd in order to do something worthwhile, passing three new free trade agreements (FTAs).

All six of our Arkansas Congresspeople cast votes in favor of the FTAs, which open up trade relations with Colombia, Panama and South Korea.

This is a good thing, yes? We like free trade and see it as a generally positive deal, right? Sure, yes, hooray. This one’s all yours, Cato Institute:

Judging by actual U.S. trade flows since their enactment, the 14 most recent FTAs give strong evidence that trade agreements deliver the predicted boost to trade with the partner countries. Based on this record, we can expect the pending agreements with Korea, Colombia, and Panama to promote both U.S. imports and exports for the benefit of U.S. manufacturing, agriculture, and the overall U.S. economy.

All right, then! Approved!

And here, let’s play a fun new game. I’ve got statements on the new trade pacts from five of our six Congressional representatives and senators listed below. Here’s how you play:

Step one: Try to figure out which bland, interchangeable official statement in favor of free trade belongs to which Arkansas member of Congress!

Step two: Try to figure out why you’re even playing this idiotic game, because who the hell cares which bland, interchangeable official statement in favor of free trade belongs to which Arkansas member of Congress!

1) “I was proud to support these three export agreements because more exports means more jobs – for Arkansas and the entire country. Thousands of Arkansans earn their living from the export of Arkansas-made products to other countries.  When job creators have access to new markets, they can hire additional employees and expand their businesses here in the United States.”

2)  “My colleagues and I have been pushing for the President to send these fair-trade agreements over to us for ratification for more than two years. Hundreds of thousands of jobs can be created in America if we take steps to increase our exports.  In fact, it is estimated that these three pacts could create over 250,000 jobs here at home. The Panama, South Korea and Colombia pacts are a perfect example of where both sides can find common-ground to stimulate our sluggish economy.  With that in mind, it is difficult to understand how these trade agreements languished on the President’s desk for that long, especially in light of our current economic situation.”

3) “We’ve got to do more to win the global manufacturing race. I want the ‘Made in America’ label seen in every country in the world and, in order to do that, we need smart, targeted and specific trade agreements that allow us to export more American-made goods to other countries.

“These trade agreements will open three more growing markets to American-made products and American-grown food and fiber, particularly from states like Arkansas, boosting production and creating more private-sector jobs. Arkansas crops like rice, soybeans and cotton and Arkansas-manufactured goods can now be exported to and sold in more world markets, increasing our state’s GDP and putting more people back to work here in Arkansas.

“We’ve got to boost American manufacturing and agriculture to get our economy back on track and that’s why I supported these three trade agreements. We need jobs and we need jobs now and I’ll keep doing everything I can to bring more jobs to America and to our great state.”

4) “I am happy that these three pending trade agreements have now passed the House. These agreements will provide a level playing field for American exports and will be particularly important for [district redacted] ag-producers.

“These agreements are a great example of how Washington can find areas of agreement to help grow our economy and help Americas job creators through the opening of new markets.”

5) “Job creation remains our top priority and focus. The three free-trade agreements, by the president’s estimate—which I agree with, will produce 250,000 jobs. 95 percent of consumers are outside the United States, and it’s crucial that we give our businesses and farmers the opportunity to compete in a growing international market. It’s not enough to just buy American anymore. We have to sell it.”

The answers are below, but to keep you from cheating, they’re upside down. So I guess you’ll have to flip your computer monitor over to read them or something. Frankly, I really should have thought this part through more carefully.

One thought on “Let’s Raise A Glass To Our Free Trading Congressmen!”