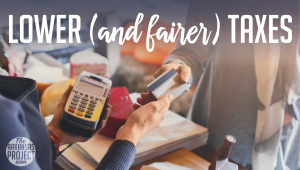 I was sitting at lunch today with someone who asked me what I did for a living. I said that I work for think tanks and write about things like taxes. This prompted the gentleman I was talking to say, “You should write that taxes should be lower.”
Well, they should. But they should also be fair. And that’s why I am writing today about making the Arkansas sales tax fairer, which could then lead to lower income taxes. I hope my lunch companion will be happy.

As most TAP readers should be aware, the Tax Reform and Relief Legislative Task Force is meeting to examine how to change the state’s tax code. They recently released a list of sales tax exemptions that they may recommend for elimination.

Cutting sales tax exemptions is good tax policy. As discussed elsewhere on TAP, there is little economic rationale for having a high number of sales tax exemptions. To the extent that it is realistically possible, the tax code should not discriminate in how people spend their money.

Some exemptions aren’t very sensible on their face. For instance, if someone buys a magazine at a store, he or she pays sales tax. But if the same person buys the same magazine through a subscription, there is no sales tax. It’s the exact same product, but in one instance the sale is taxed and the other instance it is not. There is no sales tax if a municipality sells a ticket to, say, a concert, but if a private venue has a concert, you’ll be paying the state’s sales tax if you buy a ticket.

The sales tax should be applied evenly so it does not distort the economy. Doing so would also bring in more tax revenue, which could then offset cuts in other taxes – such as the income tax. That is something that Governor Asa Hutchinson would like to see accomplished.

Economically, cutting the income tax rate could help accomplish the same purpose as eliminating sales tax exemptions. Taxing income penalizes those who work as well as those who create jobs. This tax cut could help stimulate economic growth by lowering the disincentive for productive economic activity.. A sales tax with fewer exemptions would also reduce government interference in the economy.

Neither of these two tax policy changes will lead to a dramatic change in the Arkansas economy, but they are pro-growth ideas. They are part of a number of good proposals that legislators should consider to reduce the government’s drag on the state economy (dealing with occupational licensure, for instance). The less that the state government interferes in the economic decisions of Arkansans and the less that it penalizes work, the better off the state’s residents will be.

Of course, every sales tax exemption has a lobbying group that supports it. Good tax policy does not necessarily mean good political strategy. It will be up to legislators to decide whether to take the political hits in return for producing a flatter, fairer tax code, or continue to use the tax code to reward certain interest groups. It will be interesting to see what happens with this list of sales tax exemptions when it is time for legislators to reform the tax code.