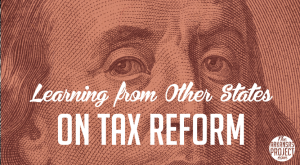 What type of tax code should Arkansas have? That is the question facing members of the state’s Tax Relief and Reform Task Force. Throughout the year, this task force has been considering what changes should be made to the state’s tax code. Last week, these members considered what lessons can be learned from other states’ experiences with tax reform.

The Arkansas Project’s readers should check out the Tax Foundation’s blog post on the hearing. It summarizes some of the key testimony from legislators in other states. Here are some highlights:

In addition to hearing about the success stories of North Carolina and Indiana, the task force heard from Representative Steven Johnson (R) from Kansas about that state’s experiences. In addition to providing a blanket tax exemption for pass-through business income, the state cut its tax revenue by almost 10 percent, without identifying tax or spending changes to offset the cuts. Slashing the state’s budget by 10 percent was untenable, forcing Kansas to raid trust funds until it was able to override the governor’s veto this year…
Making dramatic tax changes can’t be done without consideration for spending too. North Carolina Representative Bill Brawley (R) discussed that state’s new highway prioritization system, while Speaker Tim Moore (R) noted that North Carolina also reformed its education and unemployment insurance programs. Balanced budget requirements mean that states must consider spending changes as part of tax reform.

The state has a big opportunity here to reform the tax code in ways that will benefit the people of Arkansas, but tax reform can also go very wrong. If legislators learn the right lessons from other states, Arkansas tax reform will go smoother than it has elsewhere.

Legislators should also take some time to read Marjorie Greenberg’s “How to Bring Tax and Tax Reform to Arkansas” and “How the Tax Reform Act of 1986 Supercharged the American Economy” by yours truly. Both are published by the Advance Arkansas Institute and should give some insight to policymakers on sound principles for reshaping the state’s tax code.