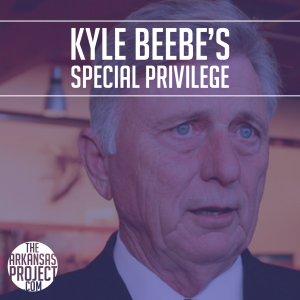 You may have heard that Kyle Beebe is getting a pardon from the governor. No one would pay much attention to this except for one thing: the governor is Kyle Beebe’s father.
According to Governor Mike Beebe, there was no nepotism at play in this case. He said his son “will be treated just like everybody else in the same situation.”
Is this true? I decided to check it out. Does the governor usually treat everyone who was convicted of drug possession with intent to deliver (the charge that Kyle Beebe was convicted of) just the same way he treated his son?
The Parole Board releases a list of everyone it recommends for pardons and clemency. It usually takes a while for these recommendations to receive on up-or-down verdict from the governor himself (although not always, as I discuss below). That’s why I only looked at the pardon recommendations made in 2013. I found 50 applicants who had committed roughly the same type of crimes that Kyle Beebe committed and whom the Parole Board recommended for pardons.
Of those 50, the governor pardoned 27.The governor also pardoned many other individuals, and some of them had committed crimes much worse than possessing marijuana. Kyle Beebe is not alone in being granted a pardon. In the final months of his final term, Governor Beebe has become quite active in using his pardon and clemency power.
However, it’s unclear whether or not his son was “treated like everybody else in the same situation.” The governor pardons many people based on Parole Board recommendations, but he also declines to pardon many others. The governor has significant discretion in his pardon power, and it’s unclear what criteria he uses in exercising it. When the governor announces his intention to pardon someone, he notes the reasons for doing so in a press release. However, when he decides not to grant a pardon, he gives no explanation. It’s hard to say whether the governor treated his son “just like everybody else in the same situation”: maybe it’s true that the 27 similarly-situated applicants that the governor pardoned behaved just a little bit better than the 23 who didn’t receive gubernatorial grace. (Here’s a fascinating story about one of the less-fortunate 23, whose case appears awfully similar to Kyle Beebe’s.)
Another factor in the Kyle Beebe case is more troubling, however: it looks like Kyle Beebe was given special consideration in the timing of his pardon. The Parole Board made its recommendation for Kyle Beebe on October 20. Less than a month later – by mid-November – Governor Beebe had already announced that his son would receive a pardon. However, as the governor’s spokesperson, Matt DeCample, pointed out to me, the actual pardon has not been officially announced. That should come in mid-December.
It is unusual for someone to receive a pardon from the governor within two months of the Parole Board’s recommendation. DeCample told me that “some [pardons] take longer than others.” It almost always takes much longer than two months, however. For instance, on May 22, 2013, the Parole Board recommended that LeQuisha Dunigan receive a pardon. The governor announced his intention to pardon her in November 2014. To state the obvious, that schedule made Ms. Dunigan wait almost a year and a half for the governor’s decision. Almost everyone else Gov. Beebe pardoned had a similarly long wait.
Sometimes pardons do move through the process quickly, but I have not yet found anyone who received a pardon within two months after being recommended for it. Perhaps I missed it. Or perhaps the timetable is being sped up in the final months of Gov. Beebe’s term. According to DeCample, Gov. Beebe “inherited a sizable backlog from Governor Huckabee. We are trying to get through as many of the files as we can to reduce that backlog for [Governor-elect] Hutchinson.” Huckabee involved himself in twice as many pardons and commutations as former governors Bill Clinton, Frank White, and Jim Guy Tucker; DeCample’s suggestion that Huckabee skimped on clemency recommendations is, to say the least, eyebrow-raising.
The lack of transparency, and the significant discretion that the governor possesses in issuing pardons, makes it impossible to say for certain why Kyle Beebe’s pardon was acted upon so quickly.
When it comes to granting the pardon, there is some possibility that the governor treated his son the same as anyone else. Kyle Beebe is just as entitled to receive the same treatment, procedure, and benefits of government as anyone else: he should not be treated any worse than anyone else in his situation. However, the speed with which the governor granted his pardon is questionable. Gov. Beebe should answer why it takes everyone else so many months longer to receive a pardon when his son was granted one so quickly. If it’s true that Kyle Beebe’s application received accelerated treatment – for instance, because he’s the governor’s son, or because the governor will no longer be the governor in January of next year – that is troubling; the appropriate label for such a phenomenon would be special familial privilege.