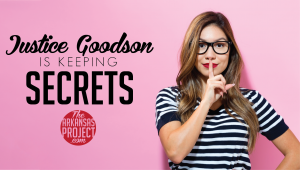 As TAP readers know, Arkansas Supreme Court Justice Courtney Goodson has been making headlines lately for her lawsuits that attack due process and the First Amendment. She has resorted to these attacks because she is trying to save her seat on the court. One group, the Judicial Crisis Network, has been taking out ads discussing Justice Goodson’s activities on the court. She doesn’t like these ads, and something called the “Rapid Response Team” (RRT), a wing of the Arkansas Judicial Campaign and Education Committee (a private, nonprofit organization), has come to her aid. The role of the RRT raises some troubling issues, especially since it bills itself as an impartial organization policing false and misleading speech.

One of the things at issue is a claim, made on the “Greedy Goodson” site, that Justice Goodson “asked for an $18,000 dollar [sic] raise, making her salary bigger than the governor’s.”
The RRT notes that Chief Justice Kemp is the one who requested a raise after a secret vote by the members of the Supreme Court. The RRT goes on to say, “The individual votes, which gave Justice Kemp the authority to request a raise, are confidential. There is no information, nor should there be information, as to whether Courtney Goodson voted for or against requesting a raise.”
This pay raise vote may have been confidential, but there is no reason for it to stay confidential. The RRT makes the absurd claim that it “would be a violation of Justice Goodson’s duty of confidentiality to reveal how she voted for a pay raise.” That is false. There is no duty for Justice Goodson to keep this vote confidential. She may wish for the vote to remain confidential (especially if she voted for a raise), but there is no legal authority that backs up a “duty of confidentiality” on this matter.

There may indeed be no record of how she voted, as the RRT points out, but that does not mean that Justice Goodson could not tell the public. If JCN is indeed wrong that she asked for a raise, then her statement would disprove any doubt. Instead, Justice Goodson remains silent on this question. She apparently stands behind some imaginary “duty of confidentiality” to keep the public in the dark on whether she wanted a raise of $18,000.

This refusal to be candid with the public stands in stark contrast with Justice Goodson’s complaints about the “dark money” being used to pay for advertisements in her re-election campaign. She is appalled that the JCN does not disclose its donors, claiming, “Many people in our state would like to ask them, but we don’t know who they are or where they are hiding.”
As AAI has discussed in the past, donor privacy is a pretty important principle. Donors to nonprofits like the JCN are legally entitled to privacy. Complaining about the fact that these donors are anonymous deflects from the real issue: what are they saying? Donors do not force anyone to cast a vote. Donors do not decide elections. All donors can do is work collectively to speak about public policy. That speech can only persuade; it does not decide anything.

Justice Goodson is very concerned about unmasking donors whose actions have not resulted in any change in the state’s public policy or cost taxpayers a dime. However, she is very protective of ensuring that no one knows how she voted on a judicial pay raise, something that did actually cost taxpayers money. That seems backward to me.

Using Justice Goodson’s logic, we should demand strict transparency for every campaign contribution received by Arkansas legislators and every organization that speaks out on public policy or politicians. But, once elected, we should allow legislators to vote on legislation in secret, never revealing how they vote.

Obviously, that makes no sense. The most important thing to know about legislators is not who funds their campaigns, but the votes they cast that change public policy or affect taxes and spending. Public officials should be accountable for what they do in office, and knowing how they vote is essential to holding them accountable. Secret votes are antithetical to the very nature of a transparent system of government.

And yet, Justice Goodson wants to keep her pay raise vote secret.

Perhaps JCN is wrong that Justice Goodson asked for a pay raise or perhaps the JCN is right. We don’t know. Here is what we do know, however:

In light of this, it is ironic that RRT is attacking JCN for publishing “false and misleading” information. It appears that RRT is carrying water for Justice Goodson, who does not want to disclose to the public whether or not she voted in favor of a judicial pay raise. If RRT is doing so in order to boost the justice’s campaign, the people behind it should drop the pretense of the organization being an impartial arbiter. If that group wants to help Justice Goodson keep her secret, they should just say so.

One thought on “Justice Goodson is Keeping Secrets”