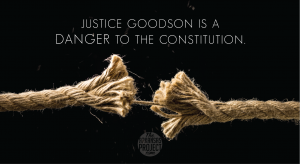 I say that not because of any issues raised in ads against her, but because of how she has reacted to those ads. She and her surrogates have resorted to using the courts to try to shut down the speech of the groups which have sponsored these ads. First, a small group of political activists who label themselves the “Rapid Response Team” (RRT) sent what they call a “cease-and-desist” letter demanding that the sponsor, the Republican State Leadership Committee (RSLC), shut down these ads. Then, when the RSLC ignored that letter (as it should have), Justice Goodson filed a defamation suit against the sponsor.

The basis for her suit is that her allies in the RRT have declared these ads to be “false,” so if the RSLC continues to run them, this group is spreading these false accusations with “actual malice.” That would meet the high bar that the Supreme Court has set for public officials (like politicians) to win defamation suits.

Justice Goodson has a big problem, however – the RSLC ads are opinion pieces that, as the RSLC has explained, have facts to back them up. Justice Goodson may not like how the RSLC has interpreted the facts about her donors and the facts about the pay raise the Supreme Court asked for and that she accepted, but that does not mean they are false. Merely because an advocacy group has deemed the RSLC ads “false” does not actually make them false. As we have discussed on TAP, the RRT’s analysis of the ads’ content is biased and flawed. The RRT is certainly free to offer its opinion on the RSLC ads, but there is no reason that anyone but a Goodson partisan would take the RRT seriously.

If Justice Goodson or her allies think that these ads are misleading, then they have quite a few different ways to respond. One of them is to educate the public. They have been doing so by going to the media and pointing out the problems with them. They can also release ads of their own. Another option is to rebut the charges made in the ads. For instance, one of the ads says that Justice Goodson requested a pay increase. Justice Goodson could refute that charge with one sentence denying that she ever did so. The fact that she refuses to do so — based on a groundless legal theory that she has a duty of confidentiality not to discuss her own pay raise — does not bolster her allies’ contention that this charge is a lie.

The improper thing to do in response to a political ad is to file a lawsuit. That is an attempt to use the government to censor speech critical of a government official. An action that is more antithetical to the First Amendment is difficult to envision. People can dislike an ad; they can think that the ads’ sponsors are horrible people – but they should not try to get the government to shut down this speech.

Here are some of the more egregious parts of Goodson’s complaint: