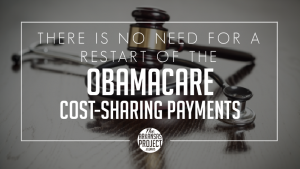 The Trump administration doesn’t have to restart subsidies for insurance companies created during the Obama administration, according to a U.S. District Court in San Francisco.

U.S. District Judge Vince Chhabria in San Francisco said the Trump administration had the “stronger legal argument” and the emergency relief sought by the states would be “counterproductive” since they had devised workarounds to the lost subsidies that give millions of lower-income people better health care options. The states had asked him to force the government to keep making the payments while the case works its way through the courts, which will take months.

The Trump administration had announced earlier this month that it will cut off cost-sharing reduction payments, which aim to reduce out-of-pocket costs for lower-income people.
Trump has said Obama’s law is imploding and has criticized the subsidies as insurance company bailouts. The White House says the government cannot legally continue paying the subsidies because there is no formal authorization from Congress.

These subsidies were ruled unconstitutional in federal court in a case brought by House Republicans against the Obama administration in 2014.

A study released this week by Avalere predicts “Silver” plan premiums on the Obamacare exchange will increase, on average, 34 percent in 2018. Only time will tell if Congress can muster the political will to provide the American people with relief from this collapsing law.