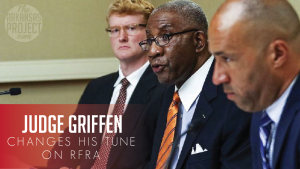 The ongoing saga of Judge Wendell Griffen continues to get more interesting.

This order was a response to Griffen’s rushing off to an anti-death penalty rally after issuing a restraining order to keep the state of Arkansas from using one of the three drugs it uses in executions.

Some legislators have even raised the possibility of impeachment. Despite the backlash, Griffen remains unapologetic. He told reporters late last week that the state Supreme Court’s order violates his religious freedom rights.

In 2015, the Legislature approved and Gov. Asa Hutchinson signed into law Act 975, the Religious Freedom Restoration Act, which prohibits any governmental action that places a substantial burden on a person’s free exercise of religion unless the action furthers a compelling government interest in the least restrictive manner possible.

“I’ve been targeted because I have acted consistent with my ethics and my faith, and that’s wrong,” Griffen told reporters Friday.

He said he believes his rights under RFRA have already been violated.

“I have been stripped from hearing any death-penalty cases, period. That’s a violation that’s happened,” Griffen said.

Asked if he planned to take court action under RFRA, Griffen said, “It is a RFRA violation, and unless it is cured, there will be court action. That’s a yes.”

Now, I’m not an attorney so I won’t weigh in on whose interpretation of the law is correct.

Richard Peltz-Steele, a law professor at the University of Massachusetts Law School, told The Arkansas Project in an email:

State “religious freedom restoration acts” (RFRAs, also “mini-RFRAs” when at the state rather than federal level) aim to impede government in the application of generally applicable laws to persons who claim that their religious freedom is burdened.  A RFRA is not a complete defense, but compels the state to pass a test of exacting, or strict, scrutiny, showing that the government has a compelling state interest in the enforcement of its religiously neutral law, and that there is no less restrictive alternative to enforcement that would accomplish the government’s legitimate aims without compromising the religious belief or practice of the person affected.

In the Griffen case, the judge may assert in his defense that the decision to remove him from death penalty cases and the judicial ethics rules that underpin that decision are rules of general applicability that burden his religious exercise.  In other words, it makes sense for Griffen to invoke RFRA.  But at this point, his case under the Arkansas RFRA has a couple of probably prohibitive challenges.
First, it’s not clear that Griffen has yet been punished in any way.  The removal of the cases might be an act of case management, meant to avoid the appearance of conflict.  In other words, it’s not clear to me that Griffen has been injured.  However, the story says that he is under investigation for judicial ethics violations.  If the judicial disciplinary board were to take some action against Griffen beyond mere case management, the RFRA would come into play.

The second problem is on the merits.  Again, as long as the official action is only to remove Griffen from death penalty cases, to avoid apparent conflict of interest with his participation in a public protest, there is a strong likelihood that the removal is a least restrictive alternative to accomplish the legitimate state aim of preserving fairness and the appearance of fairness in judicial process.  Again, though, this analysis might shift toward Griffen’s favor if the judicial disciplinary system is used to remove him from office or in some other way penalize him.

Finally, I note that Griffen has raised procedural due process objections.  These might have merit.  The question again is the first above, whether the removal action is characterized as mere case management, or as judicial disciplinary action.  If it is the latter, RFRA would seem to require an adversarial hearing process.

As anyone who has followed Arkansas politics for long knows, Griffen also likes to weigh in on public policy debates from time to time. I wondered if there might be any quotes on the world wide web from two years ago of him praising the wisdom of passing Religious Freedom Restoration Act (RFRA) into law in 2015. The above story doesn’t mention his previous punditry on RFRA — and neither have other story I read regarding his comments last week.

Not so shockingly, it turns out Griffen wasn’t the biggest fan of the law when it was being debated in the 2015 session.

Griffen said at the time:

Pulaski County Circuit Judge Wendell Griffen, speaking in opposition to the bill, likened the possible impact on gays to the treatment he experienced growing up under the “Jim Crow” laws of an earlier time.

“I know from personal experience that Jim Crow was relied upon on religious grounds. I can quote you chapter and verse,” he said.

Griffen, who also is pastor of New Millennium Church in Little Rock and a board member of the Arkansas Interfaith Alliance, said the bill could open the door to various abuses based on religion.

“I am a United States Army veteran,” he said. “This bill could allow a devout Quaker who is a pacifist to find that serving me indirectly burdens their exercise of religion. Whether I buy a hamburger, or to go to a movie, want to live in a neighborhood, or a job.”

According to Griffen, the RFRA was a “Jim Crow” law in 2015. Now, it’s a tool he wants to use against the state in a possible lawsuit he’s considering.

I’m reminded of the quote about altering one’s conclusions as information changes. In Griffen’s case, I guess he alters his conclusions as the status of his judicial career changes.