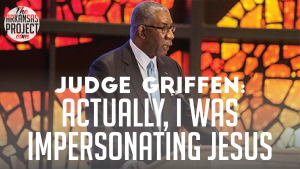 Judges should maintain the dignity of judicial office at all times, and avoid both impropriety and the appearance of impropriety in their professional and personal lives. They should aspire at all times to conduct that ensures the greatest possible public confidence in their independence, impartiality, integrity, and confidence.

This order was a response to Griffen’s actions late last week, when he rushed off to an anti-death penalty rally after issuing a restraining order to keep the state of Arkansas from using one of the three drugs it uses in executions.

Griffen also moonlights as a political pundit; he recently described Arkansas’s scheduled executions as “homicides.”
Unsurprisingly, this has led some to wonder whether Griffen can be objective and impartial on death penalty cases.

Since this isn’t the first time Griffen’s punditry and activism has raised questions about his ability to serve as a judge, some in the legislature have signaled their support for bringing articles of impeachment against Griffen for “gross misconduct.”
One of those legislators discussing impeachment is Sen. Trent Garner, who told us in a recent interview:

Griffen defended his actions on his blog Wednesday by saying his ruling was based on sound principles found in property law. Griffen also wrote that he was imitating Jesus at a protest outside the Governor’s mansion, and not an inmate waiting to be executed.

Impeachment under the Arkansas Constitution requires two-thirds support in both the House and Senate. I don’t know if there’s enough support in the legislature to remove Griffen from office.

If impeachment does occur, Griffen should look on the bright side and realize he’ll have a lot more time for blogging.