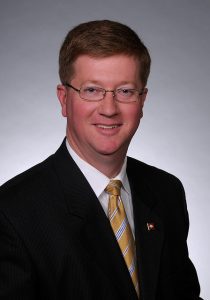 You probably heard that on Tuesday the House, on its fifth attempt, approved funding for the Obamacare “private” option for the next fiscal year. Some “private”-option advocates think of Arkansas’s Medicaid expansion as a “brilliant approach,” but I imagine our readers know I’m disappointed that it passed. The Arkansas Project and the Advance Arkansas Institute have repeatedly warned over the last year that this program will create unpredictable costs and make the state increasingly dependent upon a federal government that constantly moves the target. To date, no lawmaker has outlined how the state will pay for the program once federal funding begins to fade away in 2017. Nonetheless, at least one “private” option advocate showed he was aware of these concerns — the day after the bill was sent to the governor’s desk.

Yesterday, Senator Johnny Key amended HB 1129 in committee in order to transfer monies from the Medicaid trust fund over to the “private” option trust fund — monies that had originally come from a court settlement. Here’s a quote from Senator Key in the Arkansas Democrat-Gazette:

If this award is at the level that it could be, this certainly will take care of a lot of the future costs of the private option, should it be upheld and should it carry forward…A number of members have expressed their concern on future cost and this would take care of those costs for a number of years.

It isn’t clear whether Key’s actions were motivated by the immediate cost overruns that we’re already starting to see (which the state will likely be on the hook for pretty soon) or by the other costs we will necessarily have to shoulder in three years (once the federal government no longer picks up the entire tab of the “private” option). I think it’s fair to say that lots of lawmakers were aware of these problems — even as Governor Beebe was out praising the “economic boon” that the PO will supposedly create. All of this raises an important question: if the PO will create economic growth for the state, why do we need to allocate surplus funds to help pay for it?

(Flashback: the “economic boon” we were promised under Medicaid expansion isn’t coming, according to the state’s own estimates.)

The House and Senate will vote on HB 1129, as amended, shortly. Taxpayers should take note that Arkansas has compensated for Medicaid shortfalls for a long time and there’s no reason to believe that these shortfalls will end in the future. Why then is the state moving to allocate scarce funding to shore up the “private” option — the program that we have been told repeatedly is going to “save us money?”  Is the state — as Jonathan Ingram of FGA has written — now prioritizing able-bodied adults over the sick and disabled by redirecting limited resources away from traditional Medicaid and towards their new entitlement program?

Unfortunately, these new developments are just the latest in the string of broken promises brought to you by “private”-option advocates. Taxpayers should brace themselves — this trend will only continue.