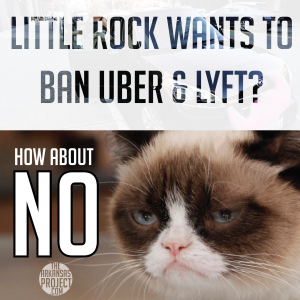 “The bottom line is that people in over 150 cities across the world are experiencing the added economic opportunities and the safe, affordable and reliable transportation alternatives that Uber provides,” company spokesman Taylor Bennett said. “Attempts to limit consumer choice and restrict economic freedoms do nothing but harm the people that rely on Uber to get around their cities and make a living.”
But city officials say Uber and Lyft’s business models don’t abide by city codes. Adcock had been asking for weeks that Carpenter send Uber a cease-and-desist letter and that the city manager issue a public service announcement letting residents know that ride-sharing is against city ordinance. She became frustrated Tuesday at the Board of Directors meeting when city officials initially didn’t agree to do that.
“I’ve been told this [service] is illegal, that ‘Yes, they are coming to Little Rock,’ and, ‘No, we don’t want them here,’ but for some reason nothing has been done about it,” Adcock said.
“Last week, we talked about how we need to warn the public about this. We would have no protection for our citizens over this. There’s no accountability. I think it’s time we have something done about this company moving in here doing illegal [business] against the ordinances for the City of Little Rock.”

Adcock has been urging the city to send out a cease-and-desist letter to Uber officials — even though the company is only advertising for drivers right now, and it hasn’t even begun operating in Little Rock yet.
Now, we at The Arkansas Project would never question a local politician’s motives when she says her only goal is “protection for our citizens,” but perhaps it is fair to say that the Arkansas Times already has. As the Arkansas Times reported, Greater Little Rock Transportation Services, a city taxi franchise holder, contributed $1,000 to Adcock’s last re-election campaign in 2012.
Greater Little Rock Transportation Services currently holds all 120 Little Rock taxi permits, according to Little Rock city records. That’s a textbook example of an industry with a monopoly in need of more consumer choices.
Matthew Mitchell, a senior fellow at the Mercatus Center at George Mason University, had this to say about the ridesharing regulations from state and local governments that are being proposed nationwide by micromanagers like City Director Adcock:
Typically, people think regulation is maybe bad for business, but it’s good for the consumer. Here it really just puts in stark relief the problem that when you have excessive licensure and barriers to entry, it’s anti-competitive, and it benefits the incumbent firms at the expense of consumers and competition and new entrants.
For past Arkansas Project articles regarding some of our state’s harmful regulations, go here, here and here.