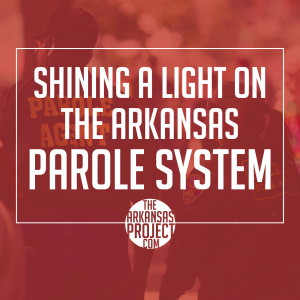 We recently previewed a proposal that would greatly improve Arkansas’s Freedom of Information Act by making executive sessions more transparent.
Now comes another proposal — this one from state Sen. David Sanders — which would shine some much-needed light on the state’s inmate system.
From KARK:

Arkansas is what’s known as a “closed records state.”  Some say nowhere is that more evident than in the prison system where behavioral records of inmates are kept from public view.
One lawmakers say that ends up putting the public in danger.  In the third part of our series we look at solutions.
“It’s all copies of everything I had to work for,” says Tammy Harper as she looks through endless stacks of papers documenting her daughter’s case.  Every year when the man accused of sexually assaulting then eight-year-old Brittany Humphrey goes before the parole board, Harper is there begging against his release.
But Harper and her daughter are missing what they believe is crucial information: a complete picture of how Brian Floss is behaving behind bars.
“I mean there’s a problem there,” Harper said. “I think it needs to be changed.”
Internal prison investigations into inmate behavior are not public record.  State Senator David Sanders (R) Little Rock says that clouds decisions on which inmates should be paroled and puts the public in danger.
“I think the best indication of what a person would do in public is what they do when they’re incarcerated,” Sanders said.
In the coming legislative session, Sanders says he’ll introduce the Public Safety Transparency Act.
Among other things, it would establish a publicly accessible database that includes inmate and parolee supervision and disciplinary records.
“[It] turns back the decades old practice of shielding that information,” Sanders said.
But the Arkansas Department of Correction says releasing the information would put prison security at risk.
“When you have confidential witness statements from other inmates or statements involving staff, if those investigative type files dealing with those specific issues were to be public… inmates can get a hold of that… to retaliate against people that might have provided information that got them in trouble,” said ADC spokeswoman Shea Wilson.
“At the end of the day, all they are is excuses,” Sanders replies. “They’re not good reasons.  In fact, to err on the side of transparency is to err on the side of public safety.”
Sanders says states like Florida, North Carolina, Arizona, and Kansas already make information available with no signs of negative effects.

Anyone who hasn’t been living under a rock knows that the Arkansas Department of Corrections (ADC) hasn’t covered itself in glory lately, given the bureaucratic fumblings that accompanied the escape of Timothy Buffington.
Allowing more public scrutiny of ADC’s investigations would be another improvement to the FOIA and would likely make the public safer. If Senator Sanders gets his changes written into law, he deserves compliments and congratulations.
Postscript: Senator Sanders also appeared on Capitol View yesterday — to take questions from David Goins about (among other things) the private option. I’ll write later this week about his appearance there; unfortunately, I don’t think I’ll be able to be quite as positive.