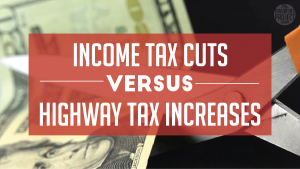 Sometimes a fancy report tells you what you already know in your guts. Taxes seem a little high in Arkansas. Everything’s a little cheaper in Memphis, Texarkana, and the Natural State’s nearby border towns. Solid national research supports the view that taxes are high in Arkansas. The Tax Foundation ranks Arkansas as the 17th highest in the nation for state and local tax burden. That’s much higher than in most of our neighboring states, where tax burdens are typically in the 40s.

Arkansas taxpayers chafed by years of high taxes chose Republican leadership for our state’s executive and legislative branches. In response to these taxpayer demands for relief, the legislature has moved ahead with multiple income tax cuts and general revenue reductions since 2012. We’re five years in, and Arkansas is on track to reduce its general revenue intake by $343 million per year. These are big achievements in lowering taxes.

In 2012, just 7 percent of Arkansas voters approved a sales tax extension to pay for Arkansas Department of Transportation (ArDOT) projects. Three years later, the same agency returned to the legislature – this time seeking additional taxes. Arkansas legislators refused to support increased taxes in 2015 and 2017. ArDOT now openly seeks ways to raise another $478 million yearly for highways from the public; their current plan involves a petition drive to get a tax-increase measure on the 2018 ballot.

Here’s the big picture: the money ArDOT seeks would more or less cancel out tax relief. Even if policymakers put the brakes on income tax revenue, that is of little import if tax cuts are offset by tax increases elsewhere.

Arkansas roads need more support in some places. Especially in the rural areas of Arkansas, roads can be in poor shape — with potholes, no shoulders, and dangerous curves. Economic development officials tell us that roads are needed to attract industry to Arkansas. And like every other person, I hate rush hour traffic.

Do higher taxes make for good roads? Well, maybe not. The money taxpayers hand over is to buy good roads. Money alone doesn’t give us good roads – for that, you need good management. Arkansas is the home of Walmart – which, by some measures, is the #1 retail firm in the world. Walmart got there by selling items shoppers wanted at good prices. Walmart accomplished this by buying more of what people wanted at good prices. We need more of the  Walmart mentality in our government officials.

Let’s just say it’s an unusual business practice to keep throwing money at ArDOT. Historically, ArDOT has focused more on building new roads rather than on maintaining the ones Arkansas has. Its own staff says that roads have not been properly maintained, even while new ones were being built. As one ArDOT engineer said in a 2017 TalkBusiness interview, “We’re really glad to see maintenance projects all across Northeast Arkansas. It’s past due. It doesn’t make sense for us to build a system that we cannot maintain.” Quotes like these from ArDOT staff don’t increase my confidence that ArDOT is animated by a Walmart mentality.

This Friday, the Legislative Audit committee will release a report that analyzes ArDOT’s need – or request — for an additional $478 million. I look forward to that committee’s discussion.

Marjorie Greenberg is the author of AAI’s new book, How To Bring Tax Relief and Tax Reform to Arkansas.