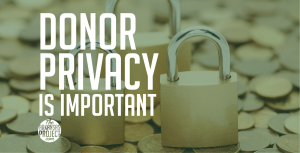 Can the government force a private organization to reveal its donors? Sixty years ago, the Supreme Court ruled in NAACP v Alabama that it could not. The court held that mandatory government reporting of donors violated the First Amendment. Unfortunately, the issue of donor privacy is under attack at both the state and federal level, making it even more important today that we learn the lesson of the NAACP case from 60 years ago.

One way to do that is to check out the video below. A group called “United for Privacy” produced it, and it discusses the importance of donor privacy to the mission of the NAACP in Alabama:

This is also an issue we have focused on at the Advance Arkansas Institute in a report last year entitled “Stifling Speech: Why the Government Should Not Require Public Reporting of Private Giving.

” Here is what I wrote then about the importance of donor privacy:

Participation in the political process is the right – and, some would say, the duty – of every American. Our state and federal constitutions protect the right to engage in political advocacy at the local, state, and national level. Often, citizens who wish to turn their ideas into reality also wish to preserve their privacy – not only because citizens are sometimes targeted when they express unpopular views, but also because in a free society a citizen’s private political views are really no one else’s business. Harassment and intimidation based on political beliefs discourage political debate and hurts our civic discourse. That is why protecting political privacy is vital to a healthy, thriving democracy. Mandatory government reports, which publicize those who donate to advocacy organizations, will chill debate about public policy.

As the video and my paper discuss, the case of NAACP v Alabama involved a state law that mandated that the NAACP report its donors to the state. Anyone familiar with the Civil Rights Era would know that such mandatory reporting was in place for one reason only – to give the government and private individuals the names of NAACP supporters to harass and intimidate. Such mandatory reporting was a way for the majority to stifle the efforts of people working through an advocacy organization to fight injustice.

The writing of my AAI paper was prompted by a bill introduced by state Rep.

Clarke Tucker (who is now running for the U.S. House of Representatives). His bill would have profoundly limited the First Amendment privacy protections of many Arkansans who donate to nonprofit organizations. That bill, HB 1005, “contravenes settled First Amendment law by imposing heavy burdens on speech that discusses politicians or their actions. HB 1005 does not outline strictly-defined rules in order to combat well-defined problems; instead, it imposes a sweeping regulatory regime that covers whatever speech that an unelected state commission decides should be regulated.”
I noted that intimidation resulting from mandatory donor reporting did not end in the Civil Rights Era. It continues today, with individuals and even government harassing people because of their political views. Rep. Tucker’s bill was a dangerous proposal that would have ensnared many Arkansans in the web of byzantine government mandates and exposed their (perhaps unpopular) views to the scrutiny of the public.

Take a minute to watch the video above. Learn about why donor privacy is so important. It has been 60 years since the Supreme Court made the definitive decision on the First Amendment implications of this issue, but today it is just as important as it was back then.