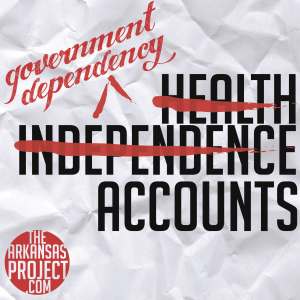 On Thursday, we looked at the “Health Independence Accounts” that are being written up by state bureaucrats in order to make conservatives feel better about their Arkansas-Obamacare expansion. It’s a frustrating development, because taxpayers were promised real cost-sharing and real “skin in the game” in the form of “Health Savings Accounts” from the very inception of the Obamacare “private” option. Unfortunately, as I explained Thursday, this promise of reform was broken. Instead, tens of thousands of PO enrollees will end up with less “skin in the game” than they currently have — because the Arkansas HIAs are nothing like real HSAs.
To give you an idea of how different an Arkansas HIA will be from a real HSA, I spoke with Jonathan Ingram of the Foundation for Government Accountability. Ingram is one of the nation’s leading experts on health care policy and reform. Here’s what he had to say about real HSAs:

The purpose of HSAs is make individuals better health care consumers. Individuals save money in their HSAs and then pay the entire cost of care received under their relatively high-deductible plans with the funds they saved. This gives them a strong incentive to spend those dollars wisely.
Because these enrollees are paying for medical care out of their accounts, they are more likely to avoid unnecessary treatment. Additionally, they have a strong incentive to shop for value and to ensure that they receive the highest quality care for the lowest cost. After all, as Milton Friedman once remarked, few people spend other people’s money as carefully as they spend their own. HSAs give patients a financial stake in getting the best value for their money.

As for how the proposed HIAs will differ from real HSAs, Ingram said:

Arkansas’s “Private Option 2.0” accounts are nothing like HSAs. In fact, they are designed to undermine the very values their advocates espouse. The “contributions” to these accounts operate generally as nominal monthly “premiums.” If individuals make their monthly contribution, all other co-payments and other charges are waived at the point of service.

What will be the practical effect of the Arkansas HIAs on doctor visits and enrollees’ behavior?

Wait…adding 250,000 people to a new, free entitlement program will increase utilization of health care services? Private-option beneficiaries who are showered with taxpayer-funded gifts will have no incentive to spend those dollars wisely?! Say it ain’t so! How could this be? This has never, ever happened with any other government entitlement program, right? How could anyone have seen this coming? (Like I said, they should’ve named them “Government Dependency Accounts.”)
For the record, I reached out to Senator David Sanders on Wednesday morning to give him a chance to defend these changes to the Arkansas-Obamacare program. My colleague also reached out to Senator Missy Irvin, who once made HSAs a pillar of her support for the Obamacare “private” option. We’d be more than happy to publish their comments here if they’d like to get back to us. I can’t imagine why they wouldn’t be eager to talk about these wonderful, conservative, personal responsibility-enhancing accounts they’ve laid at the feet of Arkansas taxpayers.
The bottom line here is that Arkansas HIAs are nothing like HSAs. In fact, Arkansas HIAs will accomplish the opposite of any real HSA’s stated goals. I realize this will be tough news for many pro-PO legislators to hear; trust me, I’m still having a tough time believing all of this myself. But this is where we are in Arkansas — and I’m afraid it’s where we’ll remain until enough lawmakers reject “governing by buzzwords” and demand actual results.