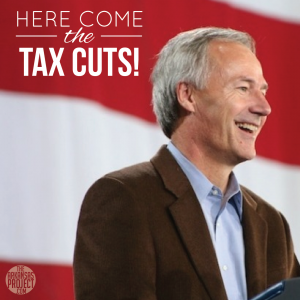 We wrote this week about Hutchinson’s encouraging inaugural address for conservatives.
His tax plan also introduced this week is another welcome change from previous years.
From Talk Business:

On Wednesday, Gov. Asa Hutchinson disclosed more details of his proposed middle-class tax cut plan, which included an adjustment at the low end of his proposal to account for a change in state tax brackets.
Hutchinson has proposed lowering the 7% income tax rate to 6% for those making between $35,100 and above, and from 6% to 5% for those making between $21,000 and $35,099. Originally, Hutchinson planned to make the floor of the tax reduction $20,000.
“Although the Governor originally announced his intention to provide tax relief for persons making between $20,000 and $75,000, that information was based on the 2012 tax brackets. The $20,000 tax bracket has now been increased to $21,000 as a result of annual inflation adjustments required by state law,” an outline of the plan released by the Governor stated.
Hutchinson’s lower tax rates would go into effect in 2016 and would reduce state general revenues by an estimated $2 million in FY 2015, $33.7 million in FY 2016, and $102.1 million in FY 2017.
Originally, the governor estimated his FY 2016 costs to be $50 million, but Hutchinson said that price tag would be “partly offset by a delay of portions of Act 1459 of 2013,” a law that reduced certain tax brackets by one-tenth of one percent.
Hutchinson’s office provided a 2016 versus 2014 tax savings estimate for net taxable income ranges.
Net Taxable Income:

If enacted, this would be a significant tax cut in stark contrast to previous years — which reduced rates, quite literally, a tenth of these amounts. Also, maybe more importantly, this tax cut isn’t an accounting gimmick like the back to school sales tax holiday.
This is a broad-based tax cut that will help many struggling Arkansas taxpayers. With any luck, it will create jobs and bring businesses into our capital-starved state.