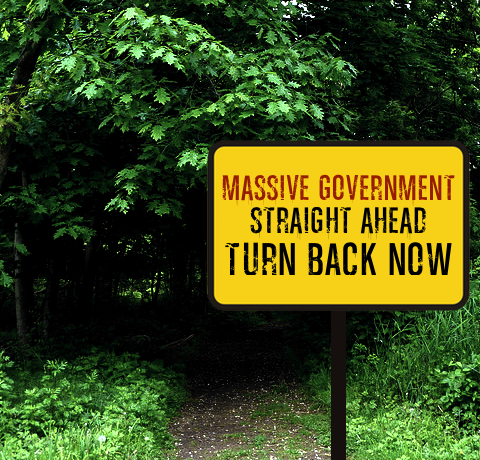 A couple of weeks ago, Senator David Sanders appeared on the highly-acclaimed Paul Harrell Program to discuss the Obamacare “private” option. Sanders did his best to spin away unpleasant facts about the PO. For example, he explained that he doesn’t believe the Medicaid expansion program is currently over budget by 10-15%. (Based on the available data, Sanders’s dismissal is “patently false.”) But Sanders’s alarming comments about his Obamacare “private” option didn’t stop there.
Throughout the interview, I was struck by how often Sanders appealed to authority (a common practice by politicians who are on weak policy footing and are forced to distract from the disasters they’ve created). This great explanation of appealing to authority is supplied by Wikipedia:

Fallacious examples of using the appeal include any appeal to authority used in the context of logical reasoning, and appealing to the position of an authority or authorities to dismiss evidence…while authorities can be correct in judgments related to their area of expertise more often than laypersons, they can still come to the wrong judgments through error, bias, dishonesty, or falling prey to groupthink. Thus, the appeal to authority is not a generally reliable argument for establishing facts.

That pretty well sums up what Sanders tried to do in the Harrell interview, as he attempted to use Texas Governor Rick Perry, Wisconsin Governor Scott Walker, and Arkansas Congressman Tom Cotton as cover for his Obamacare-private option expansion. But the story here isn’t only that Sanders committed a political no-no by attempting to justify his support for massive government growth by projecting it onto other politicians. The real story is that Sanders fundamentally misrepresented what these other politicians have advocated, and that their ideas are fundamentally different than what Sanders helped bring to Arkansas. Let’s take them one at a time.
On Rick Perry’s plan for Medicaid, Sanders said:

A dear friend of mine, from the great state of Texas, Rick Perry actually proposed the Private Option in Texas in 2008…it’s just exactly what Rick Perry was trying to, trying to do in Texas.

This is fundamentally wrong. It is true that Rick Perry proposed expanding Medicaid to cover childless adults, like the PO does. No question. But there are a few key differences that Sanders overlooks: first of all, Perry’s proposal was pitched before Obamacare even existed. His plan was not a part of Obamacare, did not use Obamacare dollars, and would not have given Obamacare a foothold in the state — unlike what Sanders did to taxpayers here in Arkansas.
Even more importantly, we have no idea what Perry’s proposal would ultimately have looked like. The plan never really got legs and very few details were ever released. For all we know, Perry’s proposal could have ended up being a plan that would have given a defined contribution to Medicaid enrollees and allowed them to purchase health insurance. This approach would have been very different than Sanders’s plan for Arkansas which forces taxpayers to pay for premiums (no matter how high they climb), and co-pays, and deductibles, and other wrap-around costs.
Here’s what Sanders said about Governor Scott Walker’s Medicaid plan:

Ya know, Governor Scott Walker in Wisconsin…when you look at what his state did. His state actually extended Medicare, Medicaid coverage all the way up to 200% of federal poverty. What his state did was actually dialed back the Medicaid program from 100% to 200% of federal poverty. Shift all those folks to the exchange and then they removed the cap on enrollment in their fee for service, uh, and and, uh uh, Medicaid managed care model where they actually added people to the fee for service Medicaid program up there. So here’s the deal, I would not have, I would not have designed this, wouldn’t have created this, wouldn’t even have thought about it had the Affordable Care Act not been passed.

(Keep in mind: the “private” option has nothing to do with Obamacare! Or something.)
I have no idea why Sanders even brought this up. Here’s what actually happened in the Badger State: in 2009, before Scott Walker was governor, Wisconsin expanded Medicaid up to 200% of the federal poverty level. But there was an enrollment cap for childless adults. Governor Walker came back and said the state would not implement the expansion under Obamacare (perhaps in part because doing so would mean the state would lose its cap on the program). So what he did was roll back the eligibility from 200% to 100% and then lifted the cap on the childless adult enrollments. A salient point here: Wisconsin is not taking any Obamacare money to do this. This is not Obamacare’s Medicaid expansion.
So, to recap: Scott Walker rolled back Medicaid eligibility and gave his state more independence from the federal government in their program, implementing reforms into an existing Medicaid population. David Sanders massively expanded Medicaid eligibility, creating a brand new entitlement for childless adults that uses Obamacare dollars, and gave Obamacare a strong foothold in Arkansas — leaving the existing Medicaid program almost completely untouched.
Finally, here’s what Sanders said about yet another one of his many good friends — Rep. Tom Cotton — who has supported Paul Ryan’s plan to privatize Medicare:

Well I will, I will tell you this Paul, if you will watch TV tonight you will see that my, our friend, Tom Cotton, is taking a heck of a beating for suggesting that we uh might want to look at a similar innovation with Medicare and that is to use premium assistance in Medicare. And uh, Mark Pryor’s beating, beating him over the head with it.

This comparison is possibly the most ridiculous of the three, so let me just say: there are actual cost controls in Paul Ryan’s plan. For example, each recipient would receive a fixed subsidy that’s equal to the second cheapest plan in their region. If they want the cheaper plan, they can take it and keep the leftover money for co-pays, deductibles, etc. But if enrollees want the most expensive plans, they — not taxpayers — have to make up the difference. Contrast that with the “private” option where enrollees can pick any silver plan they want, without regard to cost; in that system, taxpayers will pick up the tab for the premiums and the wrap-around costs. It’s pretty easy to see how these two plans are drastically different: namely, enrollees must bear the cost of their own choices in the Ryan plan. In the private option, not so much.
There’s also one larger, yet more fundamental point that should be made: under the Ryan plan, there is no expansion of the eligibility or creation of a new entitlement. The plan would reform an entitlement that’s existed since 1965, without creating a new entitlement class — just the reverse of what Sanders did with the Obamacare “private” option.
If you’re interested in hearing the full Sanders interview, you can listen here. Near the end, Sanders invited himself back on Harrell’s show, so take heart, private-option gluttons: Sanders may be saying even more weird, insupportable things about the PO on Arkansas airwaves in the very near future. If he does, I’m sure I’ll have more to say myself.