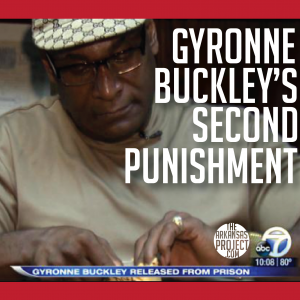 I often suspect that the people running our government have no idea what they are doing, but it is rare that this suspicion of mine is verified so persuasively.
You’ll probably remember our earlier coverage of Gyronne Buckley, who was unjustly imprisoned for over a decade and then denied compensation by our state legislature. After state Sen. Jeremy Hutchinson voted to deny Buckley compensation for being falsely imprisoned for more than a decade on the basis of an unfair trial, Hutchinson explained that Buckley should have realized that he had been “lucky” and “blessed” in that he had only spent 11 years behind bars, and that Buckley’s proper reaction should have been “jumping for joy and being happy.” Because it is uncontroversial that Buckley should never have been the victim of the unfair trial he was subjected to, I cannot imagine that most people who are familiar with Buckley’s case would agree with Hutchinson’s statements. When Hutchinson read our first Buckley article, shortly after he’d been interviewed for our series on it, he emailed us, saying:

I hope your follow up piece accurately reflects my comments and the standard by which we denied Mr. Buckley’s case. I wouldn’t even mind if you just quoted me verbatim and let your readers decide for themselves.

We hope Hutchinson found our follow-up piece satisfactory in at least one respect: we quoted him, verbatim and extensively so. (Partly because of that, it was one of the longest articles we’ve ever published.) But I remain troubled by his statement about the standard that the committee used to deny Buckley compensation.
During his interview, Hutchinson spent a great deal of time talking about the legal standard that he believed the committee used to determine whether Buckley would get compensated. Some will see the legal standard of proof as a dry and technical question. But it’s an important one. In a legal proceeding, the standard of proof determines whether the accused goes to jail or goes free – or, in this case, whether an alleged wrongdoer must provide compensation or, alternatively, can avoid the other party’s demand to pay.
In our Friday article, we provided Hutchinson’s explanation that Buckley (in Hutchinson’s opinion) had to prove at least one out of two things. According to Hutchinson, Buckley had to prove either that he was actually innocent or that state government had committed intentional wrongdoing (he gave as examples “some type of planting of evidence or perjury or something like that done by the state”). A careful reading of our Friday article demonstrates that Buckley’s case can be understood as meeting either or both of those standards. Nevertheless, is Hutchinson correct to say that this two-fold test was “the standard by which we denied Mr. Buckley’s case”?
According to state Sen. Robert Thompson, who chaired the legislative claims committee, the answer is no. I called Thompson to ask him whether the committee applied Hutchinson’s two-fold test.

What information or presentations was the legislative committee entitled to?

I told them in general that we don’t take new evidence or testimony at the committee. We’ll certainly take arguments or information from the attorneys, but we don’t hear testimony from a witness that also testified in front of the claims commission.

What had to be proven in order to compensate Buckley?

That’s a good question. That’s a question that we put to the attorneys on both sides … What he [Buckley] has to prove in order to recover is probably a question that was never really answered for members of the committee … What you ask is a very good question that was never really answered by Mr. Buckley’s lawyers, that I could hear. [Thompson also paraphrased Attorney General Dustin McDaniel’s perspective; according to Thompson, McDaniel argued that Buckley’s theory was a “new cause of action” constituting an unprecedented “brand new legal theory.”]

How did you vote on Buckley’s case?

I did not vote; I was the committee chair, and typically I don’t vote unless there is a close roll-call vote. So I just chair the committee, and from what I can recall, it was a voice vote… And it was pretty clear that a majority of the committee members voted for a motion to overturn the Claims Commission.

So here’s the bottom line. It looks like Hutchinson was incorrect when he explained that the committee used Hutchinson’s standard. I think it’s more likely that many members of the committee, when making their decision, used no discernible standard at all. And I don’t think I can agree with what I take to be Thompson’s view: that it’s only the lawyers’ job to suggest appropriate standards for each case. After the body that hears these cases decides a few of them, its members should have some preliminary idea about the nature of the rules they should be following.
According to Mark Hampton, Buckley’s lawyer, the legislative claims committee spent roughly 40 minutes listening to various attorneys, on various sides, discuss Buckley’s claim. Then Thompson, who chaired the committee, explained to Hampton (who was in the middle of making his argument) that it was time to move along and vote, because the committee had a full schedule and needed to resolve other matters.
And then, in short, the committee overturned the recommendation of the state Claims Commission to compensate Buckley. Apparently, the committee’s decision was based, in part, on the fact that there simply wasn’t enough time to hear what Buckley’s lawyers wanted to say. Even though both Thompson and Hutchinson criticized Buckley’s lawyers for providing insufficient testimony, insufficient argument, or insufficient evidence.
(After the committee’s decision, we also emailed the attorney general – who appeared at the legislative committee to argue against compensating Buckley – several questions about the case. His office responded with a laconic four-sentence statement, explaining that the AG would have no further comment because he considered the matter resolved and because the legislature agreed with him. Convenient!)
Admittedly, legislators are busy and consequential people. Their time is very important. Such importance presents a nice contrast to the situation of Gyronne Buckley, who of course spent more than 11 years behind bars because of an unfair trial. Buckley’s time, apparently, is not quite so important.
I hope that, someday, the legislators on the claims committee will come to some agreement over the rules and standards they are supposed to use. I wonder what those who must appear before the legislative claims committee must think when they realize that the committee’s legislators, who make final decisions on their cases, do not seem to have a basic understanding of, or a basic agreement on, the rules they use to determine whether Arkansas citizens deserve compensation for the bad acts of Arkansas government.
I respect the rule of law – and I know that we all must be equally subject to the same rules. And I appreciate that even the best rules will occasionally have bad results. That is the way law works, and I get that. But when we have a state senator admitting that he’s agnostic about the rules of the committee he runs, which makes binding legal judgments, this is hard to respect. And when we have another state senator making up a new rule of law that, apparently, none of his other colleagues knew about, this is even harder to respect – no matter how pious his explanation, about how he and his colleagues are just following the proper standard, might initially appear. Because, at this point, it doesn’t look to me like these legislators are paying much attention to law at all. At this point, it looks to me as if these legislators are more like a croupier and a pit boss, cheerfully presiding over a rigged game.