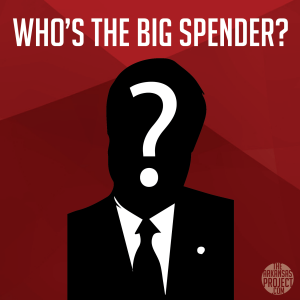 When it comes to supporting reductions in federal spending, Arkansas’s congressional delegation looks pretty good. Almost every member of Congress from the state backs bills that, when lumped together, would reduce taxpayers’ burden.
In fact, just about every member of Congress from Arkansas supports legislation that would cut federal spending. All except one, that is. Any guesses who?
If you said Senator Mark Pryor, you’re on the money. So to speak.
According to data compiled by the National Taxpayers Union Foundation (NTUF) on the first session of the 113th Congress, the members of the Arkansas delegation sponsored or cosponsored legislation that would reduce federal spending by an average of $92.8 billion. The various bills supported by Senator Pryor, however, would increase spending by $6.5 billion.
NTUF looked at all the bills sponsored or cosponsored by members of Congress, and then added up their price tags. This method results in a “net spending agenda” that reflects whether each set of bills would result in a net increase or a net decrease in federal spending.
The biggest friend of the taxpayer in the delegation was Representative Tom Cotton, whose net spending agenda would reduce federal spending by more than $166 billion. Senator John Boozman comes in second, with a spending-cut tally of almost $144 billion.
Every member of the delegation supported some legislation that would impose new costs on federal taxpayers. But, with the exception of Senator Pryor, the other bills each legislator supported created a counterweight that, on net, would reduce federal spending.
Overall, our House delegation looks pretty good – Arkansas’s House delegation has the sixth largest spending reduction agenda of any state or territory. Unfortunately, our Senate delegation doesn’t score nearly as well.
Most of the delegation supported numerous bills to save taxpayer dollars. Senator Pryor, however, cosponsored only one: a bipartisan bill to eliminate the Independent Payment Advisory Board under ObamaCare. If this legislation became law, it would save taxpayers a whopping $15 million. This drop in the bucket was easily outweighed by the other big-spending bills he backed.
Most members of Congress representing Arkansas are trying to cut federal spending. Almost all of them are working to reduce the burden on Arkansas taxpayers. On the other hand, there’s Sen. Mark Pryor, who seems intent on increasing federal spending.