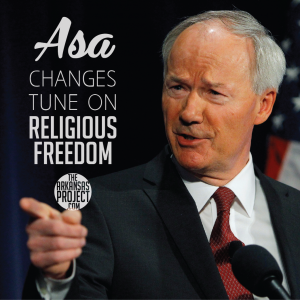 I’ve said it very clear publicly. I think the language I’ve used is I’d support a RFRA that mirrors federal law and is similar to what has been passed in 20 some other states.

This is surprising, because this bill is quite similar both to federal law and to other RFRA laws passed in 20 other states.
Indeed, Hutchinson said at a speech this past weekend that he would sign the bill in its current form. So, unless the federal government’s and the states’ RFRA laws have dramatically changed in the period of a few days, Hutchinson’s views have.
Remember, intellectual consistency isn’t the strong suit of some when it comes to the RFRA.
It was clear from Hutchinson’s speech that one of the reasons for his shift in position was the looming criticism of big business.
Hutchinson said:

I have had some communication personally with business leaders across the state. Others have communicated in different fashions and they raise an important issue. I don’t think it’s necessarily based upon what’s in this law as much as how it’s being construed nationally.

One example of this “communication” from business leaders at the 11th hour came from the Little Rock Regional Chamber of Commerce yesterday:

While we believe that HB 1228 seeks to protect the religious freedoms of all Arkansans, it can be interpreted to provide religious protection for Arkansans who choose to discriminate against other Arkansans. This is bad for business and bad for Arkansas. Unless and until this issue is clarified by amendment in HB 1228, the Little Rock Regional Chamber of Commerce is against the bill.

If we’re at a point in our state and nation where legislation can be opposed solely based on how it can be “interpreted,” then lots of good bills are destined to die in the future.
You don’t vote on a bill based on “how it’s being construed nationally” or whether it can be creatively “interpreted” to mean something sinister. You vote on a bill based on what it actually says.
What the RFRA actually says, as Marc Kilmer noted this week, is that if the state substantially burdens someone’s religious beliefs, the state needs to have a good reason to do so.
As far as worries about the RFRA being “bad for business and bad for Arkansas,” one need look no further than our neighbors in Texas which passed a RFRA in 1999. Last time I checked, Texas wasn’t having any trouble attracting jobs and companies to move to its state because of RFRA concerns.
Hopefully, legislators can get a good RFRA law passed before the legislative session soon ends, but to do that they’ll have to focus on what the law actually does — instead of focusing on groundless speculation from opponents of religious liberty about what it might imaginarily do.