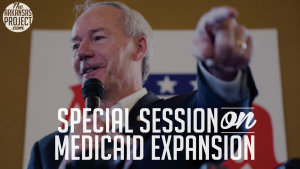 Asa Hutchinson announced a $70 million budget cut to state government as well as some changes to Arkansas’s Medicaid expansion program.

The changes to the “Arkansas Works” Medicaid expansion program funded through Obamacare will be debated in a special session next week.

Hutchinson said about the session’s agenda:

It’s a very short list. We have the Arkansas Works waiver authorization to provide greater training opportunities and to focus our state resources on those that are at or below the federal poverty level. We’ll have on the call restructuring of the Arkansas Health Insurance Marketplace (AHIM) that will focus our legislative oversight and review for future recommendations in regard to AHIM. It will make the small business exchange optional and make it clear that we will not have a state individual exchange, as I’ve already indicated.

Hutchinson also said his agenda for the special session would include “technical codifications” for “ethics and medical marijuana legislation.” Legislation that would “boost long-term reserve funding for state” in order to enhance the “bond rating in our state” would also be on the agenda, according to Hutchinson.

In a press conference today, Hutchinson also announced a $70 million budget for the current fiscal year due to a “miss on revenue.”
The budget cut would be “absorbed” by state agencies without state employee layoffs or reductions in services, according to Hutchinson.

One of the big challenges in trying to anticipate the forecast going into the fiscal year was the level of refunds that would be paid in the wake of the 2015 tax cuts. Those tax cuts reduced middle income taxes by $100 million dollars. So far, it’s interesting that we’re on track to exceed $479 million in refunds for individual income taxpayers this year. Compare that to last year where the total payments were $360 million. So you can see the challenge in anticipating refunds with the tax cut that was put into place. The good news of that is because of the refunds there is more money on citizens’ pockets this year that they’ll be able to spend on our economy. That’s the objective of tax cuts.

We’ll have more coverage of the special session once it begins next week.