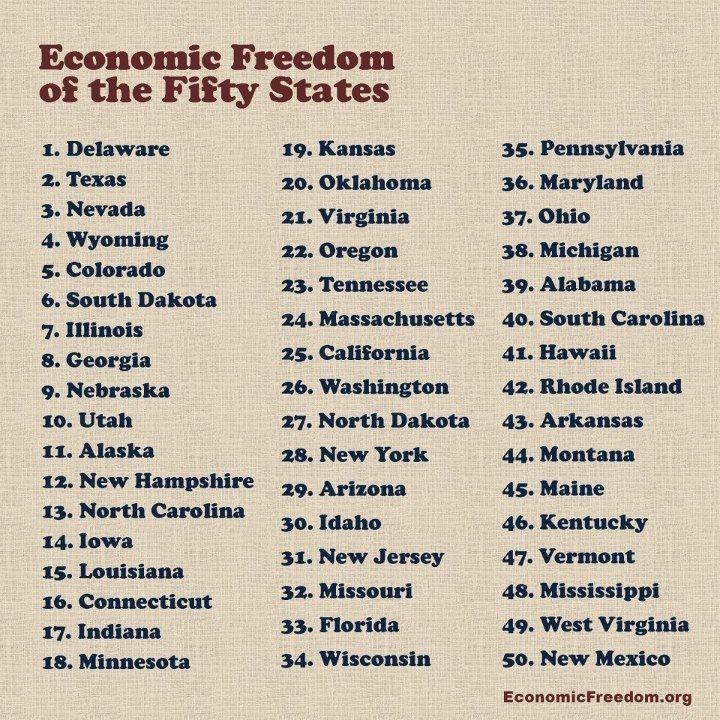 Last week, Fraser Institute released their annual Economic Freedom of North America report. They use numbers and pictures and stuff that shows how quickly we are transforming into a European-style socialist utopia. Turns out, it’s happening pretty fast (and trust me, these people know what they’re talking about — they’re Canadian).

The report — which includes 10 Canadian provinces — ranked Arkansas #51 overall in economic freedom or 43rd among the American states, putting us in the bottom tier. Our neighbors in Texas received the 4th highest score, but the province of Alberta took #1 overall. Let that sink in for a minute: more freedom in Canada than in America…

In fact, “for the first time in the report’s history, Canadian provinces have a higher average level of economic freedom than American states.”

Canada is now #5 in the global economic freedom index, while the U.S. as a whole is slipping:

“Earlier this year, the United States saw its global economic freedom ranking drop to 16th out of 144 nations and territories, its lowest-ever showing and a sharp drop from the second overall position in held in 2000.”

As for what’s driving the U.S.’s decline in economic freedom, Fraser cites an “increase in government spending, over-regulation, and cronyism.”

In Arkansas, we see these three factors — increased spending, over-regulation, and cronyism — in the form of Medicaid expansion, overbearing licensing requirements, and economic development subsidies. If our state continues on this path, our neighbors to the east may soon be saying, “Thank God for Arkansas,” turning the old adage around on us. How can we reverse the trend and spark a new era of opportunity in our state? It starts with ending those three practices, reforming the state income tax system, and choosing the best options for health care reform that Obamacare permits.

In other words: unleash economic freedom. Get government out of the way. Give the people of Arkansas what they deserve — opportunity. Give parents a voice in their children’s educational decisions. Encourage investment in our state by eliminating the capital gains tax. Let taxpayers keep more of their money!

We’ve tried big government programs in our state for generations and we are still in the bottom tier in far too many categories. Let’s embrace solutions for our state that value economic growth and individual choice. Let’s give freedom a chance, eh?