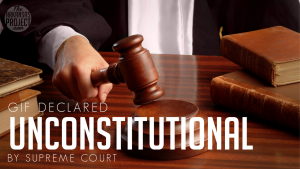 The program was the Legislature’s creative way of steering large sums of state taxpayer dollars to regional boards for “economic development” to be used as individual legislators saw fit. The program has come under increased scrutiny recently; at least a couple of former legislators’ actions with GIF have led to fraud charges by federal authorities.

The court’s opinion in the case — brought by former State Rep.

Mike Wilson against the Department of Finance and Administration — can be viewed here.

A “grant” to CAPDD is inadequate under article 5, § 29, just as an appropriation of “state assistance” or “state aid” was held to be unconstitutional in Wilson II. The State argues that the purpose of the appropriations can be found in external statutes—here, Arkansas Code Annotated section 14-166-201 et seq.—where it is clear that the statutes are applicable. The State contends that in light of the statutory and regulatory mechanisms expressly governing the disbursement of funds to planning and development districts (Ark. Code Ann. §§ 14-166-201 et seq. and DFA Rule 2005-3), the only reasonable interpretation of the “distinct purpose” of the challenged acts is to promote economic development for the benefit of the citizens of Arkansas. However, the plain language of article 5, § 29 requires the purpose of the appropriation to be distinctly stated in the bill itself. Accordingly, we reverse and remand on this point without reaching Wilson’s factual allegations because the acts are facially unconstitutional.

Translation: if legislators want to appropriate taxpayer dollars for pressing “economic development” needs such as ozone therapy, they’ll have to write that into the legislation.

A spokesman for Attorney General Leslie Rutledge, whose office defended the state in the case, told us after the opinion was released:

The Attorney General will work with the Governor and members of the General Assembly to ensure that the State Supreme Court’s opinion is followed.

Tim Griffin said in a statement that Arkansas taxpayers deserve a system that’s “less susceptible to corruption.”
Griffin said:
I applaud the Arkansas Supreme Court’s decision that the current General Improvement Fund (GIF) system is unconstitutional. Surplus funds belong to the taxpayer, and the taxpayers of Arkansas deserve a system that is transparent, accountable, and less susceptible to corruption.

Asa Hutchinson said in a statement to The Arkansas Project:

I am pleased with today’s Supreme Court decision because it raised constitutional concerns over legislative use of general improvement funds.  With the recent news about abuses on the use of GIF, I will be supportive of legislation that will permanently end the practice.

While GIF died today, it remains to be seen if more news regarding corrupt practices by legislators using this program will trickle out in the future.