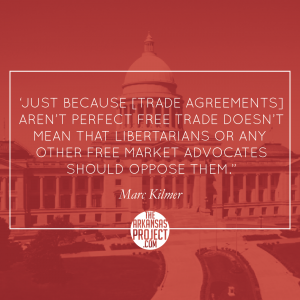 “I like free trade, but those free trade agreements are something else entirely.”
I’ve often found that those who agree with the case for free trade are skeptical about free trade agreements. Indeed, at a general level, just about all knowledgeable people acknowledge the clear benefits of free trade: consumers have access to lower-cost and higher-quality goods, our economy grows, businesses are more efficient, and there’s more innovation in the marketplace.
But some people argue that things like the North American Free Trade Agreement (NAFTA) aren’t true free trade. Instead, they contend that the U.S. should just lower trade barriers unilaterally.
That sounds good in theory. However, given our political situation, it’s unlikely to happen. So if we can’t have pure free trade, do free trade agreements produce the same benefits?
The answer appears to be “yes.”
Although trade agreements are not pure free trade, they involve two or more countries agreeing to reduce or eliminate certain trade barriers. Usually these agreements contain a way to settle disputes and impose penalties on a country that is not living up to its pledge to lower trade barriers.
The U.S. has a variety of these treaties with nations around the world. According to the Business Roundtable, Arkansas exports ten times as many goods to these countries on a per capita basis than nations with which we don’t have free trade agreements. Two of the three biggest overseas markets for Arkansas goods are Canada and Mexico, NAFTA partners.
The U.S. is considering new proposals that would expand the number of countries covered by free trade agreements. If these proposals were approved, Arkansas would benefit.
Take the Trans-Pacific Partnership, an agreement currently being negotiated between the U.S. and 11 Asian and Pacific countries. Currently, there are 126,000 jobs in Arkansas that are supported by trade with these countries. This agreement would expand opportunities for Arkansas companies to reach overseas consumers. It would also provide Arkansas consumers with lower-cost products.
Are free trade agreements perfect? Of course not. Do they live up to the libertarian ideal? No. But there’s an old saying that applies here: “don’t let the perfect be the enemy of the good.” That is, don’t let the failure to obtain a perfect policy stop you from achieving an improvement over the status quo.
Free trade agreements benefit the Arkansas economy. That’s a fact. Just because they aren’t perfect free trade doesn’t mean that libertarians or any other free market advocates should oppose them.
P.S. Free trade is one of the “Three Big Ideas” that we’ll discuss at our forum at noon this Friday. Interesting speakers, big ideas, a free lunch: what more can you ask for? Click here to get more details and to register – we hope to see you on Friday!