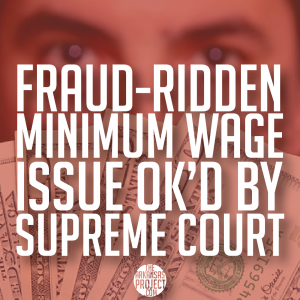 The Arkansas Supreme Court, in its opinion yesterday, removed the final obstacle to a statewide vote on hiking the minimum wage. One startling aspect of the Court’s decision is that it appeared to tolerate — and, thus, to encourage — a significant level of petition fraud.
We wrote recently about a special master’s report filed by Special Judge John B. Robbins, which found that the Give Arkansas A Raise Now campaign submitted approximately 8,501 signatures that are invalid due to apparent notary forgery; nonetheless, the Supreme Court decided that the measure should stay on the ballot in November.
From Arkansas Business:

Arkansas’ highest court ruled Monday that a proposal to gradually raise the state’s minimum wage can remain on the November ballot.
The Arkansas Supreme Court denied a Little Rock businessman’s effort to block a ballot question that will ask voters to raise the state’s minimum hourly wage from $6.25 to $8.50 by 2017. Arkansas is one of the few states with a minimum wage below the federal level of $7.25 an hour.
Early voting for the election began Oct. 20.
The businessman, Jackson T. Stephens Jr., said supporters missed a key deadline for submitting their petition and that some signatures were invalid because a notary’s signature had been forged. Justices said the secretary of state’s office properly certified the question, known as Issue No. 5, for the ballot.
“It gives Arkansas voters an opportunity to vote on giving hard-working Arkansans a raise,” said Steve Copley, chairman of Give Arkansas a Raise Now, which petitioned to place the question on the ballot. “We always felt that if we could get this before voters, they would support this.”
Democrats have been pushing the wage increase, touting it as a way to boost turnout in the November election. The party’s top candidates — including Democratic U.S. Sen. Mark Pryor and gubernatorial nominee Mike Ross — endorsed the measure earlier this year, and the state party adopted the increase as part of its platform.

This might be another case of the Court getting “whatever result they want when they craft the law to match what they want done,” as Dustin McDaniel famously said.
David Sterling, Stephens’s attorney, had this to say of the Supreme Court’s decision:

I am very disappointed in the decision, but the Supreme Court has spoken. The Court has determined that certain kinds of fraud are permitted in the petition process as a practical matter. I don’t like that, but I’m prepared to live with it.

Stephens released a prepared statement, and those interested in future judicial politics in Arkansas may find the final sentence of the portion quoted below to be of some interest:

It is shameful that, according to our Supreme Court, fraud is not a consideration in this matter of public trust, and now the whole ballot initiative process is open to fraud. It is even more shocking that there wasn’t a single dissent, indicating that all 7 justices embraced this decision and its long-term implications on future generations … A judicial-recall provision as an initiated act is the most appropriate response to this and other shocking judicial decisions Arkansans have been subjected to this year.

With the election just days away, it’s worth revisiting the reasons to oppose a minimum wage increase.
The American Enterprise Institute’s James Pethokoukis probably had the best rebuttal to America’s heiress, Hillary Clinton, and her recent comments that it’s not businesses and corporations creating jobs — it’s minimum wage increases that do it!
From Pethokoukis:

Yet as I point out at my AEI blog, the U.S. economy created 50 million jobs from 1981 through 2007 even as the real value of the minimum wage fell by nearly a third. Then, of course, there’s the inconvenient fact that no mainstream economist, including Paul Krugman, would deny it’s investment and ideas that drive long-term economic and employment growth — not consumer spending through a higher minimum wage.

Here’s that clip of Clinton boasting about her economic bonafides in case you thought I was taking her out of context (Spoiler alert: I’m not).
I’d be shocked if the American public put someone this economically illiterate in the White House — but as H.L. Mencken was fond of saying, “No one ever went broke underestimating the intelligence of the American public.”