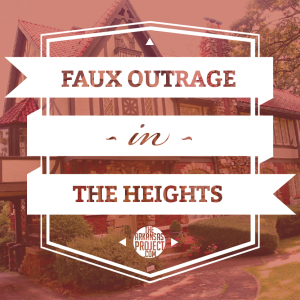 Have you heard of the Southern Progress Fund? It’s a political action committee that hopes to bring the blessings of progressivism to states like Arkansas which have been turning redder than a Santa Claus outfit in recent years.
Yesterday, this PAC produced an unbylined piece that provoked eyerolls throughout The Arkansas Project headquarters, given its high synthetic outrage content. The article described a squabble between two state House candidates: Republican Stacy Hurst and Democrat Clarke Tucker.
From Mr./Mrs. Unbylined Progressive:

Hurst and Reed made headlines this week when they investigated the preschool placement of Democrat Clarke Tucker’s four-year old son. Tucker had sought a place in public preschool for his son, and after being told there was no spot, made the lack of available pre-school a campaign issue. A few days before the start of the school term, a slot became available for Tucker, but the family had already committed to a private school.
Through the use of the Arkansas Freedom of Information Act, Reed researched the four-year old and tried to turn the pre-school placement into a kerfuffle for Tucker, but the matter blew up in his face when the Democrat held an emotional press conference deriding Reed and Hurst’s tactics, his wife at times in tears behind him.
Now, we don’t think Stacy Hurst is a bad person. But it’s obvious her judgment allowed her to listen to bad advice, in the form of using the Arkansas FOI laws to attack a family’s preschool decisions for a four-year old. This is exactly the type of attack that makes Arkansans disgusted with politics, and has no place in our state. Two things are obvious, and can be rectified right now:

To state the obvious, the Southern Progress Fund has produced a lot of heavy breathing here. Can it really be true that anyone at the SPF believe that requesting information which public agencies have to hand over by law is akin to a private-eye investigation and an invasion of privacy? Do the outrage experts at the SPF really think that, to atone for her sins of looking at taxpayer-funded, publicly available documents, Hurst should apologize to her opponent and fire her political consultant?
One of the problems with the Southern Progress Fund’s predictable rush to crank up the outrage machine is that their report misunderstands and misdescribes reality. It makes no sense to describe a Freedom of Information Act request as an attempt to “research the four-year old”; on the contrary, that request appears to be an attempt to catch Tucker, a public figure, straddling the line between fact and fiction. Ultimately, this attempt was successful.
According to the Arkansas Times and FOIA’d e-mails, Tucker’s campaign mailer claiming his kid was “denied pre-k” looks as if it didn’t correctly describe what happened.
Other FOIA’d emails show Tucker’s father-in-law playing the “don’t you know how important our family is” card, offering a none-too-subtle reminder in an e-mail to Superintendent Dexter Suggs that Tucker’s grandfather was the Little Rock school board president during the school district’s desegregation in 1957.
Public records requests are sometimes the only avenue available that regular people have to learn what their government is really doing. Contra the Southern Progress Fund, it’s not invading anyone’s privacy to request public information. However, as this episode shows, FOIA requests can produce some awfully entertaining and enlightening results.