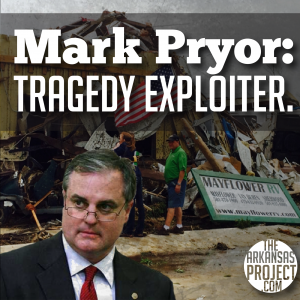 Despite what you’ve been told, Tom Cotton stood with us every step of the way. Tom voted for disaster relief and full funding of FEMA. Senator Pryor, start focusing on the real issues. Leave our community and our tragedy out of your campaign.

Faulkner County contains most of the areas that were devastated by recent tornadoes. As of press time, the Pryor camp has not returned The Arkansas Project’s request for comment.
Cotton has been under fire for several weeks on the issue of “storm relief”: left-wing Senator Harry Reid’s Super PAC launched a disgraceful ad last month that tries to convince voters that Cotton opposed storm relief for Arkansas storm victims hit by this year’s tornadoes.
But the ad is grossly misleading, to say the least: four of the votes in question happened more than a year before the recent storms and had absolutely nothing to do with Arkansans receiving disaster aid. Those bills were for Hurricane Sandy relief and were riddled with funding for pet projects — including $2 million for the Smithsonian, $118 million for Amtrak, and $16 billion for a federal slush fund known as the “Community Development Fund.” Cotton has consistently cited these pork projects as the source of his opposition to the bills and — despite what Harry Reid and friends want you to believe — those bills had nothing to do with the recent Arkansas storms.
Congressman Cotton did, however, vote to fully fund FEMA and supported a bill to continue funding FEMA during last year’s government shutdown. And, according to his campaign, Cotton worked “hand-in-hand” with the rest of Arkansas’s congressional delegation to obtain federal funding for victims of the recent Arkansas storms.
Politifact pointed out some of these details while fact-checking the Reid smear ad, noting that none of the votes mentioned had any specific disaster relief for Arkansas:

…the ad is a bit disingenuous because it really only addresses three disaster relief bills, and a couple of other Arkansan delegates voted against final passage. The ad also leaves out the times that Cotton voted for disaster relief funding, as long as there were spending cuts to other programs to make up for it. Overall, Cotton typically doesn’t support spending that isn’t balanced out with cuts in other areas.
Additionally, if you think this ad — which shows tornado-ravaged areas — is talking all about Arkansas, that isn’t the case. Most of these votes had to do with Hurricane Sandy.

Pryor has also released his own web video that peddles false information regarding Cotton’s support of Arkansas storm victims.
Harry Reid and Mark Pryor don’t want facts to get in the way of a nice attack ad. They’re perfectly comfortable using tornado footage from two months ago to smear Cotton for votes that were held a year and a half ago. It’s politics at its worst.
Although in some ways this makes sense for Pryor: after a wholly unremarkable career in the U.S. Senate, Pryor’s biggest accomplishment is casting the deciding vote for Obamacare. I’m sure he’d much rather send a film crew out to survey storm damage than answer questions about the health care disaster he’s helped create — a disaster composed of financial storms and even the loss of loved ones for some American families.