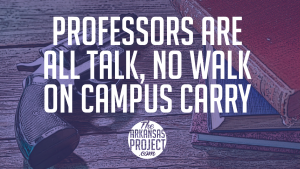 Left-wing professors may not like campus carry laws — but don’t expect them to quit in protest, according to one expert.
The national media jumped on a story earlier this month about a University of Kansas professor resigning his position in response to a new policy allowing concealed carry on campus.

Anti-gun groups appreciate such stories; they feed the narrative of anarchy breaking out if law-abiding gun owners are allowed to carry a weapon on a college campus.

However, examples like the one in Kansas happen very, very rarely, according to John Lott, president of the Crime Prevention Research Center.

Lott said in an op-ed in The Hill:

In May, associate history professor Jacob Dorman resigned from the University of Kansas. He accepted another tenured position at a different public university in a noncampus-carry state.

In his resignation letter, Dorman predicted that Kansas will be “driving off faculty members” when it enacts campus carry on July 1.

Dorman is not alone in his prediction. Many at Texas public universities expressed similar dismay after the passage of a similar law in 2015. According to the University of Texas at Austin’s “Campus Carry Policy Working Group,” people thought it would “impede the University’s ability to recruit and retain students, faculty, and staff.”
…
Despite being the subject of some national news coverage, these faculty departures are very rare. At the University of Kansas, only one out of 2,600 faculty members have left.

Just two out of 20,322 have left the University of Texas System. And one of those two, a retired professor, would likely have visited at other schools anyway after his retirement.

It looks like faculty resignations in protest of “campus carry” will also be a rare event here in the Natural State. The new law that was passed in the 2017 session goes into effect in September.

However, no faculty or staff have resigned in protest of the “campus carry” law, according to spokesmen for the University of Arkansas, University of Arkansas at Little Rock and Arkansas State Univeristy
During debate on the law earlier this year, higher education officials were adamant that the law would make campuses less safe. Based on examples from other states and the lack of resignations here in Arkansas, I think we don’t have to worry about professors fleeing to other states anytime soon.