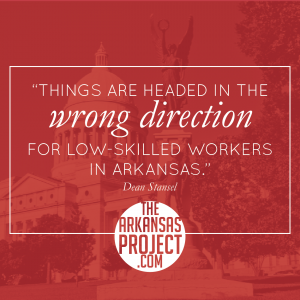 Arkansans are “headed in the wrong direction” for low-wage worker freedom in Arkansas, an economist said in a speech at an Arkansas Center for Research In Economics event in Conway last night.
Dean Stansel (associate professor of economics at Florida Gulf Coast University) said in his speech:

It turns out Arkansas is the second most burdensome (occupational licensing) system. They were focused on low-skill jobs…jobs that you can get without a college degree. Your state’s voters overwhelmingly approved an increase in the minimum wage. It’s going to put your minimum wage above the federal minimum wage. The reason this matters given what we just talked about with the licensing requirements…you already have the second-most burdensome licensing requirement system so low-skilled workers have a hard time getting jobs. You’ve got to spend $212 in fees and 689 days of education just to get a job. Now, you make it harder by increasing the minimum wage because what that does is it makes it harder for low-skilled workers to get a job. Things are headed in the wrong direction for low-skilled workers in Arkansas.

We’ve written recently about why a minimum wage hike would likely hurt entry-level workers. Indeed, the recently-approved minimum wage hike will likely increase the already high level of teenage unemployment in Arkansas.
In his speech, Stansel referred to the Institute for Justice report that ranked Arkansas the second highest for barriers to industry. (Pro-tip: this is a ranking where it would actually be best to be 49th or 50th.)
Some of the most outrageous examples of occupational licensing run amok are the requirements that our legislators have imposed to be a fisher, a funeral attendant, or a makeup artist.
If Arkansas wants more economic growth and more job opportunities, the legislature should begin the process of repealing some of these absurd occupational licensing requirements that limit Arkansans’ ability to earn a living.