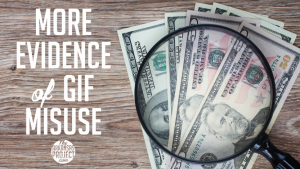 A new nonprofit with a focus on “alternative medicine” received approximately $42,000 in General Improvement Fund (GIF) state grants from 2013 to 2015, according to the Arkansas Democrat-Gazette.

Unfortunately, it appears the only outcome from these grants was making Arkansas taxpayers ill.

On Sept. 10, 2013, Arkansas Health and Economic Research Inc. registered — as most new businesses are required to do — with the Arkansas secretary of state’s office.

That same day, the Benton nonprofit company’s executive director wrote his first letter seeking thousands of dollars in state grants.
The startup’s chances of getting state money might have seemed slim.
The company’s focus was alternative health practices, including ozone therapy that mainstream researchers call quackery.
The executive director wasn’t a scientist, but an insurance agent who now works as a Saline County juvenile intake officer.
And the grant application offered no evidence that anyone connected with the firm was an expert in economics or health.
Yet 15 days after incorporation, Arkansas Health and Economic Research received word that it had won a General Improvement Fund grant from the state, backed by a single lawmaker, for $20,000.
And that was just the first grant.
Between 2013 and 2015, records show the nonprofit received a total of five General Improvement Fund checks, OK’d by four legislators, for $41,698 in taxpayer money.

Two of the four legislators who approved the grants to Arkansas Health were former State Rep.

The other two legislators named in the report are State Rep.

Bart Hester. Hester says he regrets sponsoring a $5,000 grant to Arkansas Health at the advice of Woods.

As loyal readers of this blog will know from our previous reporting on GIF corruption, the Arkansas Supreme Court recently heard a lawsuit by former State Rep.

Mike Wilson on the constitutionality of GIF practices. The court has yet to release a decision on the matter.

Wilson says the program is nothing more than money laundering without sufficient oversight. Defenders of GIF say everything is on the up and up.

What we have now is a fairly elaborate process where an appropriation is made by the Legislature to the Department of Finance and Administration. Then these eight distinct planning and development districts have to submit a grant application to receive these funds for purposes of evaluating grants for economic development. What they then do is they have a staff that entertains grant applications from entities within the legislative districts that form the planning and development districts. They are formed around legislative districts…not individual Representatives or Senators. They are open for business to evaluate any grant requests that is made by anyone in the state of Arkansas who is within that district.

Unfortunately, this version of how the process works was contradicted in the newspaper’s report by Berryville Mayor Tim McKinney, a board member on Northwest Arkansas Economic Development District.

McKinney said board members were instructed by legislators on how to vote on which projects would receive grant funding.

I can tell you nobody at the board level asked any questions. We were given a list of projects, and we were told to ‘vote yes here, vote yes here. Good job guys, let’s eat.’ It was clear the Legislature still controlled that money.

But the story gets even worse! One of the “alternative medicine” practices promoted by Arkansas Health was “ozone therapy” — a practice the FDA says has no known useful medical application.

If we’re going to waste taxpayer dollars, let’s at least make sure they go to practices with proven medical benefits!
Wilson told The Arkansas Project in an interview Monday afternoon:

It’s another startling incident of the whole GIF mess and the record is replete with more examples of that same disregard for any kind of proper governmental purpose. I’m hopeful the Supreme Court will read those documents and take heed.

It’s time for the GIF process to be ended, or at least significantly reformed. Hopefully, the Supreme Court will save the Legislature from themselves on this issue.

One thought on “More Evidence Of GIF Misuse Amidst Lawsuit”