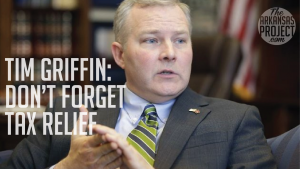 The Tax Reform and Relief Legislative Task Force shouldn’t “skip the relief part” of its mission, according to Lt. Gov.

Tim Griffin.
Griffin said in a letter to task force members Tuesday that legislators would be making a mistake if they focused solely on “revenue-neutral reforms” to the tax code, without offering further tax cuts to taxpayers.

Our tax code is too complicated.

There are multiple ways to simplify the code such as revise the bracket structures, remove unnecessary exemptions in order to lower rates on personal and business income, and eliminate anti-growth provisions like the capital gains tax. According to the non-partisan Tax Foundation’s report, Arkansas: The Road Map to Tax Reform, our individual income tax rate schedule is “incredibly cumbersome,” and “[t]his sort of complexity creates administrative headaches and makes the code difficult for individuals to understand.” Let’s simplify the code.  But simplification should not be our only goal.

When potential job creators compare Arkansas to other states, the complexity of our tax code can be a factor, but the price of doing business is the primary deterrent. The tax reform and relief task force should not focus only on revenue-neutral reforms and skip the relief part. That would be a mistake.

Speaker of the House Jeremy Gillam told the task force last month that tax cuts for the 2019 legislative session weren’t the “overriding mandate of this task force.”
Griffin noted in his letter that Arkansas is ranked 38 out of 50 in the Tax Foundation’s State Business Tax Climate.

Griffin said Arkansans suffer under a heavier tax burden due to a state government that spends too much.

Why do Arkansans pay so much in taxes?  It’s because Arkansas state government requires too much revenue to function—it spends too much. What does spending have to do with taxes?  Everything.  By law, our revenue and expenditures must balance, and rightfully so. So where do we find the savings? Transformation is the answer. Transformation is not about trimming a few government agencies and programs. To the contrary, it is about rethinking and modernizing state government over a period of years, allowing for tax dollars to be spent where they are most needed, and making sure our hard-working state employees have the tools they need to do their jobs.  It is the key to tax reform and relief, and I applaud Governor Hutchinson for making transformation a priority. But make no mistake, the legislature is an essential partner in achieving any real change. I understand this task force is not charged with addressing spending, but the tax dollars required to fund state government are directly related to tax policy.

Griffin didn’t give any specific examples of places to find savings or ways to “modernize” state government in the letter.

The task force’s preliminary report on improving Arkansas’s tax code is due in December.