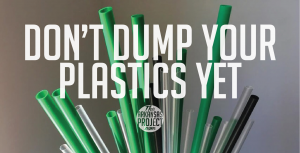 Richard Mason is worried about plastic. Mason is a geologist and past chairman of the Department of Environmental Quality Board of Commissioners, and he bemoans our use of plastic straws and other items in a recent Democrat-Gazette op-ed. While I sympathize with his desire to help the earth, he undercuts his message by the failure to recognize basic facts about plastic use.

Mason begins badly by quoting Chief Seattle, repeating that “To harm the earth is to heap contempt on its creator.” It’s a nice sentiment, but Chief Seattle never said that. As Snopes points out, “The words Chief Seattle has become famous for were written by Ted Perry, the screenwriter for Home, a 1972 film about ecology.”
Mason then stumbles again by claiming that every hour “500,000 plastic straws are trashed.” I’m not sure where he gets that from. If that is the case, then that means that every day 12 million plastic straws are put in the trash. There is no support for that figure that I can find online. In 2011, a 9-year-old came up with the figure that 500 million straws are thrown away every day, and that number has stuck in the popular press.

It probably isn’t true, but it’s what people use. I guess Mason wanted a different number.

So it should be clear by now that Mason, despite his credentials, doesn’t really do much research into what he writes.

That is further evident by his fulsome support of bans on plastic straws. Such bans may sound nice, but they are not an effective way to deal with plastic litter. Consider the results for the recently-announced Starbucks straw ban, as researched by Reason magazine’s Christian Britschgi:

Right now, Starbucks patrons are topping most of their cold drinks with either 3.23 grams or 3.55 grams of plastic product, depending on whether they pair their lid with a small or large straw. The new nitro lids meanwhile weigh either 3.55 or 4.11 grams, depending again on lid size…
This means customers are at best breaking even under Starbucks’ strawless scheme, or they are adding between .32 and .88 grams to their plastic consumption per drink. Given that customers are going to use a mix of the larger and smaller nitro lids, Starbucks’ plastic consumption is bound to increase, although it’s anybody’s guess as to how much.

At most, straws account for about 2,000 tons of the 9 million tons of plastic that are estimated to enter the ocean each year, according to the Associated Press—.02 percent of all plastic waste. The pollution problem posed by straws looks even smaller when considering that the United States is responsible for about one percent of plastic waste entering the oceans, with straws being a smaller percentage still.

As countless experts have stressed, truly addressing the problem of marine plastic pollution will require going after the source of this pollution, namely all the uncollected litter from poorer coastal countries that lack developed waste management systems.

To be fair to Mason, he does advocate for an overall reduction in plastic use, not just straws. But whether it is straw bans or plastic ban bans or some other trendy anti-plastic cause, these campaigns often are long on virtue-signaling and short on facts. They make people feel good about “doing something” without really doing much to address the problem.

As Britschgi explains, the bulk of the waste problem comes not from the U.S., but poorer countries around the world. If Arkansas cities and towns start banning plastic bags or plastic straws, it will do almost nothing to help make the world cleaner. I’m all for people making more environmentally-friendly choices in their personal life, but let’s not pretend that taking these steps (or hectoring governments to start banning things) is the answer to the perils of plastic.