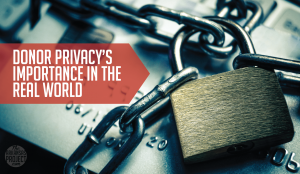 It’s a common agenda item for “progressives” to support mandatory reporting to the government of donors to organizations that speak out on public policy. They dress up this expansion of government power as a way to combat so-called “dark money” that supposedly plagues the election process. If they get their way, it will not do much (if anything) to clean up elections, but it will chill the free speech rights of millions of Americans.

Donor privacy is an issue we’ve discussed previously on TAP. When Clarke Tucker was a legislator, he pushed for legislation that would have imposed mandatory reporting in Arkansas. Nationally, Democrats in the House of Representatives are promoting a bill that would do so nationally.

This is such an important issue because donor privacy is a key part of encouraging a healthy discussion of policy issues. It allows the discussion to focus on issues, not personalities. It also encourages more people to get involved in this discussion. Under mandatory reporting, some people may face intimidation because of their political views. Those in this situation may choose to forego participating in the policy discussion, weakening our civic fabric.

While Arkansas legislators wisely relegated Tucker’s bill to the garbage can, other areas have embraced mandatory reporting. Denver is one of them. That city’s legislation is facing a challenge by the Goldwater Institute. Matt Miller, an attorney with the institute, recently wrote a blog post about testimony in that case. He highlights instances where people have discussed the intimidation they faced because of their political views:

The trial concluded with testimony from representatives from two free-market, limited government think tanks from other states. The first, who works on “right to work” issues nationwide, testified about how he was spat upon as he and his wife attempted to park at an event where he would be speaking. Later, he was threatened by a caller to NPR while he was giving an interview. The caller asked him if he “knew what he would find when he got home tonight.” This alarmed the witness so much that he and his employer sent a private security team to the witness’s house to do a welfare check on his wife, who was home alone at the time.

The final witness, who works for a state-based free-market think tank, testified to a litany of harassment that he has endured over the years as a result of the work he does. He produced a series of vile and obscene emails threatening him with sexual violence. He produced a tweet wishing the witness would get a “bullet between the eyes.” He produced a separate tweet from a state legislator—who should know better—attempting to link his group, which works on issues like tax and education policy, to white extremist groups. And he discussed how, recently, his group has been subjected to a series of harassing emails and phone calls from a local college professor.

The blog post has other instances of political intimidation that will only be made worse by mandatory government reporting.  As Miller concluded, “The government should not be facilitating it by forcing nonprofits to disclose their donors so that their identities, occupations, and employers can be put on the Internet for everyone to see. By doing so, these laws invite exactly the kind of threats, intimidation, and violence that was documented during the trial.”

People should not be fooled by the misguided crusade to stamp out what some people call “dark money.” In reality, those on this crusade are opposing the essence of free speech.