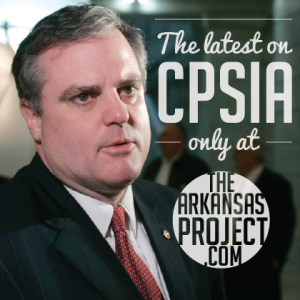 Senator Mark Pryor probably thinks I’m a bad parent.
I just spent ten days exposing my children to products that he considers unsafe. In fact, he championed a law making it virtually illegal to sell the very things I let my kids play with. How could I be so irresponsible? Don’t I care about my children’s safety?
Of course I want to protect my kids from harm. I would never intentionally expose them to a dangerous product. But it appears that Senator Pryor and I have quite different views on what “dangerous” means.
The forbidden items I gave my children were simply old toys. My one-year-old, five-year-old, and I recently spent ten days visiting my parents and grandparents. My parents don’t exactly belong on the show Hoarders, but they do have a severe aversion to throwing anything away. As a consequence, they still have many of my childhood toys. They even have some of my mother’s old playthings. When we visit them, my children love playing with toys that were made between the 1950s and the 1980s.
I don’t think that’s a particularly hazardous situation. Senator Pryor disagrees. He was the lead senator behind the Consumer Product Safety Improvement Act (CPSIA). According to him, prior to the enactment of the CPSIA, “the marketplace was replete with dangerous and, in many instances, toxic products that were compromising the safety of American families, not least of all our children.”
The way CPSIA is written, the presumption is that all children’s products, including toys, are dangerous until proven safe. I’m thankful that the CPSIA’s standard only applies to toys being sold in the marketplace and not toys stored in my grandparents’ closet.
The CPSIA is a complicated law, passed in response to a few anecdotes of unsafe toys. As Walter Olson exhaustively documents in his excellent blog, Overlawyered, the implementation of this law has caused huge problems for many individuals and industries. From book sellers to second-hand stores to makers of custom toys, the CPSIA has had devastating consequences.
According to Sen. Pryor, the problems caused by this law are all worth it. He claims that “we’ve seen incredible progress” in children’s product safety since Congress passed the law. Among the biggest victories, according to him, is that “we’ve cut fatalities in half.”
It is indeed true that toy-related fatalities for children under 15 years old have dropped since 2008 (the year the law was passed). In fact, toy-related deaths have been falling since 2006. As I’ll explain in a future blog post, it is highly unlikely that CPSIA had much (if any) effect on toy-related mortality.
While fatalities have fallen since 2008, toy-related injuries have increased. In 2012 (the last year for which there are complete data), there were roughly 30,000 more toy-related injuries treated in emergency departments than in 2008. If CPSIA is responsible for the reduction in toy-related deaths, as Sen. Pryor claims, does that mean it’s also responsible for the increase in injuries?
Senator Pryor may believe I was being irresponsible by exposing my children to “dangerous” products. However, he should be relieved to know that even though I let my children play with toys that were made decades before Congress passed CPSIA, they were neither killed nor injured by them.
The fact is that the CPSIA needlessly burdens many small business owners for very little improvement in public safety. So many industries were harmed by this bill that it will take a series of blog posts to give readers a good idea about the damaged it caused. That will be my focus over the next two weeks.

One thought on “Does Senator Pryor Care More About My Children Than I Do?”