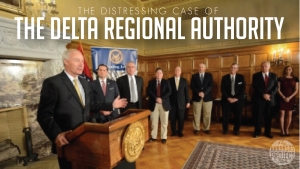 By now you’ve probably heard about President Donald Trump’s proposed budget. Among other things, it would abolish funding for the Delta Regional Authority (DRA).

The DRA is an government agency (funded, of course, by federal taxpayer dollars) that services eight states, including parts of Arkansas. It was established in 2000.

Although funding for the DRA was included in legislation that funds the federal government through September, questions about whether the DRA is an effective use of taxpayer resources remain.

It might come as no surprise to you that Chris Masingill, federal co-chairman of the DRA, thinks it’s doing a fine job.

Since being created by Congress in 2000, DRA has been the leading advocate for supporting job creation, building communities, and improving lives across the eight states and 252 counties and parishes we serve in the Mississippi River Delta region and the Black Belt of Alabama.

DRA’s primary goal is to help bring economic prosperity to one of the most distressed areas in the country. It is a successful model of public-private partnerships…and I urge you to continue funding DRA so it can continue to make strategic investments in infrastructure, businesses and family in the Delta region.

While these are all laudable goals, it’s reasonable for taxpayers to ask if they’re receiving a good return on investment on the millions in federal funds given to the DRA since 2000.

If you believe the region that the DRA services should be exhibiting economic progress, you’re in for a disappointment.

One might also wonder, after looking at a summary of DRA projects funded in 2016, if the DRA actually knows where “the Delta” is located. For example, Mountain View received $200,000 from the DRA to help a boat company expand. I do not have a position on whether the project is worthwhile — and I do not want to single out Mountain View — but I doubt that most Arkansans would consider Mountain View a part of the Delta, even though it’s in the DRA’s service area.

All in all, about half of the DRA’s expenditures in 2016 went to areas such as Mountain View, Little Rock, and Bull Shoals — which aren’t even in the Delta.

The DRA seems to be an example of a government institution whose continued failure justifies its own existence. Federal lawmakers should look at more cost-effective ways of promoting economic opportunity in the Delta region, rather than continuing to throw tens of millions of dollars every year at the DRA.

A spokesman for the DRA did not return a request for comment.